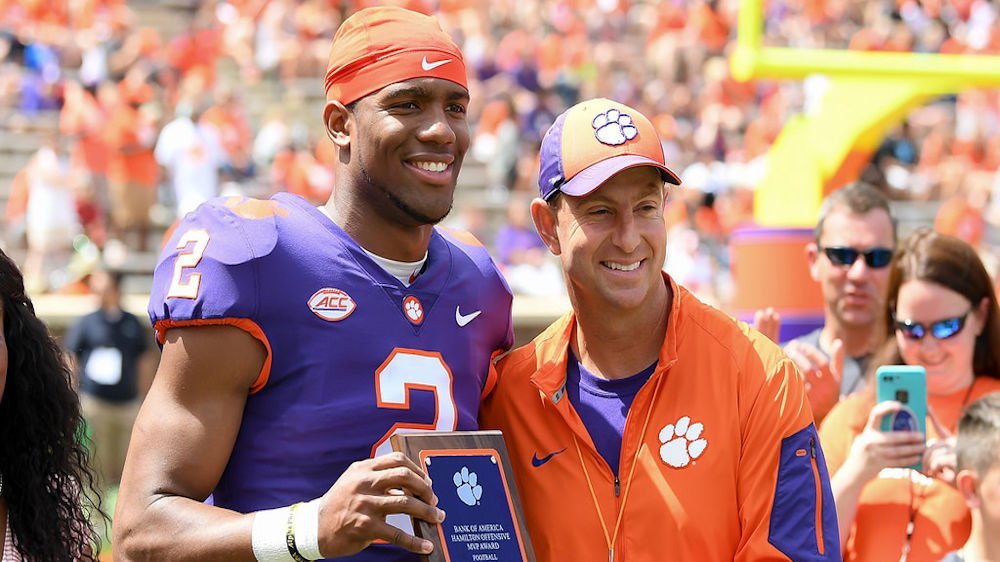 Swinney said regarding Bryant's comments that he wasn't treated fairly: 'This is isn't middle school.'

Swinney opening statement on Bryant: Looking forward to that, and then quickly want to address the Kelly Bryant situation. I know we've got a lot of people probably on here that want a comment from that, and obviously saddened and disappointed that he's chosen to leave the team, but I really have absolutely nothing bad that I can say about Kelly Bryant. He's one of the best young people I've ever been around, and even though I don't think this is a great decision, I certainly respect it, and it doesn't change anything that I feel for Kelly. I love him, care about him. I wish him nothing but the best, and, again, sad that he has made this decision.

All I can say is another program, wherever he decides to go, is going to get a quality quarterback and a very quality young man. We appreciate everything that Kelly gave to this program while he was here. He's a graduate, and like I said, he's one of the best young people you could ever be around. It's disappointing, but that's where we are, and something he decided that he felt like was best for him, so you have to respect that.

As far as the decision, it's just -- you know, as a coach, sometimes you have to make tough decisions that are in the best interest of the team, and this is one of those decisions. And I would make it all over again because I believe that it's what's right for our team, and I feel like Kelly would have continued to help us win and play a lot, but it's not what he wanted to do. I certainly could have started him this week, which would have limited his options, but that's not how we operate here. That's not who we are.

As far as us and our team, we'll take what we've got and get back to work and see if we can play our best game against Syracuse.

That's where we are.

Q. Dabo, Kelly was quoted in the Greenville News as saying it was a slap in the face and that he didn't get a fair shake. What's your response to that?

DABO SWINNEY: Well, again, you know, he's totally entitled to his opinion. But absolutely I think we've given him a fair shot. I mean, I've always tried to be as open and honest and transparent as possible with Kelly throughout the process, as we are with all of our players. He won the job after Deshaun Watson, and he beat out the No. 1 quarterback in the country to do that in Hunter Johnson and another highly recruited quarterback in Zerrick Cooper, both of who have gone on to play elsewhere.

He won the job, and he was the starter for us all last year and did a great job, and then he came out of camp slightly ahead, and so he continued to start these first four games.

But like I said, I definitely feel like he's been given a fair shot. I don't think there's any question about that. But at the end of the day, this is not middle school. There's tough decisions that have to be made at this level, and you've got to do what's best for the team. I've had many, many players that have beaten out veterans over the years. Nuk Hopkins, when he came here in '09, after a couple games he was the best receiver and he beat out several veterans.

Sammy Watkins, I mean, he beat out seniors as a true freshman. Dexter Lawrence, you know, we had a bunch of veteran D tackles when Dexter Lawrence got here, but he won the job. He was the best player.

Christian Wilkins, the day he got here was just the best player, and we had several veterans on the team.

At the end of the day -- Deshaun Watson, a couple games in, he wins the job. He's the best player. You know, my job is to do what's best for our program and for -- I have to be responsible to everybody on this team. Mitch Hyatt. Mitch Hyatt comes in here and he wins the starting left tackle job as a true freshman, and there was a lot of veterans on the team. So it just kind of comes with the territory. Again, it's unfortunate, but you know, he's entitled to his opinion and how he feels. You just have to respect that.

You know, I'm sure there may be more that's coming down the road for other programs. Whatever. And I hope that the coaches don't say, well, you know what, I'm going to play them five games so they don't have any options.

I don't think that's right, either. I think at the end of the day, you just do what's right or what you believe is right, and then y'all live with it, and time will tell how it all plays out.

When you're in a leadership role, sometimes you have to make very tough decisions, and there's always going to be people that are going to criticize the decision because maybe it didn't go the way they wanted it to go or whatever, and that just comes with the territory. At the end of the day, you can't worry about that stuff. You've got to make decisions based on what you think is right and what your convictions are and you keep moving forward.

But there's no question he had a very fair shot here. And again, I've been honest and open and transparent as possible. But he's entitled to feel however he wants to feel, and nothing, again, changes how I feel about him. I think he's one of the -- he's one of the best young people I've ever been around. I mean, it's impossible for me to say anything bad about him, and I hope nobody else does, either.

Just wish him well, support him, even though he may not like this decision or whatever, and we've got to move on. That's just the way we are, where it is today.

Q. Do you feel like you could have done anything differently in the way the whole situation was handled that would have allowed you guys to keep both Trevor and Kelly on the roster and happy?

I mean, personnel decisions are made all the time. You just have to respect his decision, and this is what he feels is best for him. And even though you don't agree with it, I don't really know what else -- I did tell him if he wanted to go somewhere else and play next year, he was welcome to -- I would agree to not play him the rest of the year but continue to stay and be a part of it. If that's what he wanted to do, I would support him in that, but that's not what he wanted to do.

At the end of the day, he made a decision that he felt was best for him, and you have to respect that and move on. He has to move on. We've got to move on and get ready to go play Syracuse.

Q. How do you feel Kelly's decision will affect the team just inside the locker room, morale, that type of thing, moving forward?

DABO SWINNEY: I don't think it'll affect us at all. I mean, everybody is disappointed. Everybody -- these players understand competition. This is just -- players play, coaches coach. You don't always agree with decisions and things like that, but you get back to work. You take who you've got and you make the best of it, and that's exactly what we'll do.

At the end of the day, again, everybody is making a big deal out of this because it's the quarterback. Like I said, this happens every year. I mean, there's a sophomore that beats out a senior or there's a freshman, an unbelievable rare freshman like a Nuk, a Sammy a Christian and Deshaun, a Mitch Hyatt, whatever, that walks in here and beats out a veteran guy. That happens every year, so this is not something that never happens. It just so happens that it's a quarterback this year.

But that's just where we are. I mean, I don't know what else to say. My job is to do what's best for the team, and it's not always easy, but that's my job, and I try to do it to the very best of my ability and do what's right.

WATCH: Baylon Spector with 10 tackles in win over Colts