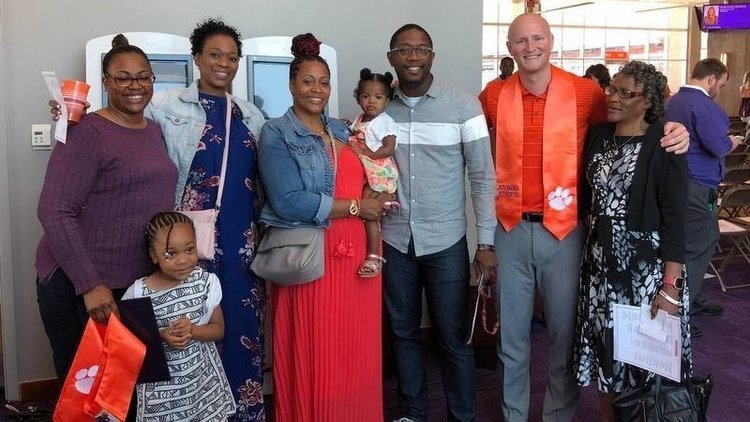 Oglesby spending time with the family of Demontez Stitt

Oglesby replaces long-time C-N assistant Shane Williams who leaves the program after a decade to work closer with youth in the sport with a series of basketball camps.

"I couldn't be more excited to have Terrence join our staff at this particular time in the history of our program," Benson said. "I've known him since I recruited him as an assistant at both Tennessee and Charlotte. He's always been an elite competitor and performer. Those attributes will serve him well as he transitions to being a coach after a decade-long professional career. It's also exciting because of his ties to this program. His father (Tony) was a standout in the 1980s, his younger brother Paxton was a manager for us, to have another Oglesby join our program is a fantastic feeling."

Oglesby has spent the last two seasons on the coaching staff at Clemson with Brad Brownell. In 2018, he assisted the Tigers in making a trip to the Sweet 16 for the first time in 21 years. He was a member of the coaching staff on this year's NIT team.

"I've had a long history of being around the Jefferson City area," Oglesby said. "It's good to be back here, it's good to see familiar faces and to get to work with Chuck Benson is an exciting endeavor."

Oglesby had a stellar pair of seasons with the Tigers as a player before moving on to a 10-year pro career in Europe and the G-League.

As a freshman with the Tigers, Oglesby averaged 10.5 points per game en route to earning ACC All-Freshman team honors. He led the team in three-point shooting in both threes made (85) and percentage (40.5 percent). He was the first Tiger named ACC Rookie of the Week twice since the 2004 season.

He upped his game as a sophomore, taking Clemson to the NCAA tournament. Oglesby averaged 13.7 points per game and once again led the Tigers in threes made, three-point field goal percentage and added in the team lead for free throw percentage. He notched a career-best 25 point effort in a 98-87 win over South Carolina.

"More than anything on the basketball side, I feel like I can help guys achieve what they want to achieve," Oglesby said. "I've been in a lot of the experiences that guys want to get to in their basketball careers, and I've done a lot of things that they're going through right now. I think a lot of that is where the value lays in what I bring to Carson-Newman."

Over the last decade, Oglesby has spent time with eight different European teams in Spain, Sweden, Italy, the Ukraine and Georgia. He also spent a year in the G-League with the Iowa Energy.

"Chuck recruited me when I was at Tennessee and at UNC Charlotte," Oglesby said. "I'm thrilled to work alongside him. He has a great reputation in this business and I have an opportunity to learn a lot from him."

Oglesby was born in Norway while his father Tony was playing overseas and has dual Norwegian citizenship. He played for Norway in the FIBA Europe Under-20 Championship in 2008. He led the tournament in scoring with 24.4 points per game.

Terrence and Maria Oglesby have two children, Damon and Harper.

Excited to be an Eagle! The Clemson family got me prepared and now I’m ready to get to work! Thanks to everyone @ClemsonMBB and especially @coachmckay for helping me get started! https://t.co/6Cy2xOD0gB