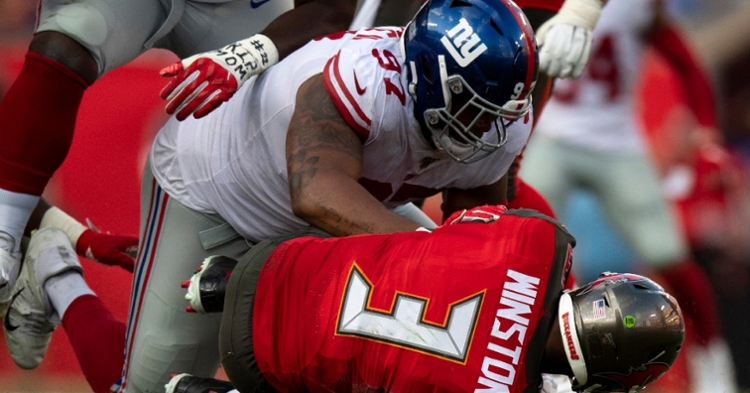 Lawrence has been a disruptive force. (Douglas DeFelice-USA TODAY Sports)

Dexter Lawrence has made quite an impression midway through his NFL rookie season.

Pro Football Focus has him as the No. 4-rated rookie in the NFL at this point, after a 17th-selection to the New York Giants in April:

"As a rookie, Dexter Lawrence is making a strong case for being one of the league’s best 0/1-techs in all of the NFL, ranking third in PFF grade at the alignment at 86.3. Regardless of where he is aligned though, Lawrence has been stout against the run with an 85.0 run-defense grade ranking ninth among interior defensive lineman. Moreover, Lawrence has only one missed tackle across his 21 tackling attempts — in other words, good luck getting past this 340-pound brick wall if you are a running back."

Lawrence has tallied 11 solo tackles, 22 total, with 2.5 sacks and a forced fumble this season.

Not seeing many people talking about #Giants 1st round pick Dexter Lawrence...

Getting good push in his pass rushes and chasing plays all over the field. Stout and athletic NT! Looks to be getting better each week!@ClemsonFB @llawrence2139 pic.twitter.com/PJRP30njUz

Very good End/Tackle stunt by the two rookies, Oshane Ximines & Dexter Lawrence...Timed so well and OX gets low and utilizes an arm-over to create space and disrupt the right side of the OLine, which allows DLaw to loop around untouched and flush Keenum from the pocket. pic.twitter.com/KaGAUfmmuP

Nothing to see here, just 342-pound @llawrence2139 diagnosing and then chasing down a screen to help force a punt.
Dexter Lawrence's hustle stands out in every game. You rarely see a 342-lb IDL move like him in tight spaces, let alone chase plays down in the 10-yd range. #Giants pic.twitter.com/Ns8XPPduwP