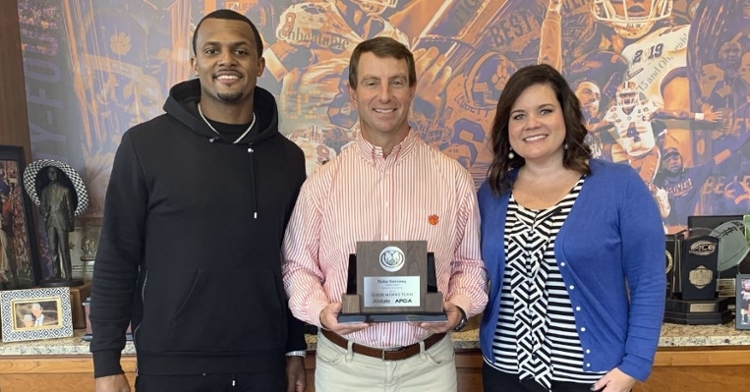 Former Clemson quarterback Deshaun Watson made a surprise stop in Clemson this week to honor his former coach.

Dabo Swinney was named the honorary coach for the AFCA Good Works team in September and Watson was on hand to personally deliver the trophy in a surprise before Swinney's Tigers this week.

Since 2009, the Swinney family and Dabo’s All In Team Foundation have given over $5.5 million back to communities and programs in the state.

On Wednesday, Coach Swinney thought he was surprising the team with an appearance from @deshaunwatson. Instead, it was Deshaun who surprised him with his selection as the honorary coach on the 2019 Allstate AFCA Good Works Team! #ALLIN pic.twitter.com/HM7XKPry40

Watch Watson present the trophy and more below (video courtesy of Allstate):