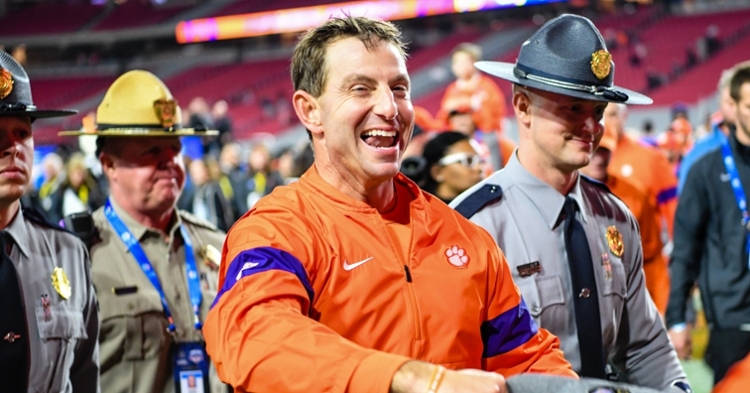 Swinney and Co. will be playing in the title game on Jan. 13

Head coach Dabo Swinney was asked what he was most proud of after his team's impressive 29-23 win over No. 2 Ohio State by ESPN's Scott Van Pelt.

Just their heart," Swinney said shortly after the Fiesta Bowl win. "You know just hanging in there. We did not play well early. Didn't take care of the things that that we control and didn't do some of the little things but I'll tell you what, Ohio State's a great football team, well-coached but just the fact that they (Clemson) kept their poise and they didn't quit and again, they showed the heart of a champion."

Swinney knows you don't luck up and win a ton of games in a row for no reason.

"I mean, that's you know, you don't win 29 games in a row, if you ain't made of the right stuff and whatever that stuff is, you saw it tonight and just so proud of their will to win and their belief."

Van Pelt said that it must be gratifying to see your team's will to win.

"Oh, no question," Swinney said. "I mean that's what it's all about. I mean these guys you know if you're going to be a champion, if you're going to win at the highest level, you've got to be able to handle adversity and you also got to be able to handle success. Both of those things are critical if you're going to be a consistent team or program. To see it tonight on the biggest stage, listen we've played the most freshman of any team in the country as this is a young football team and to see them respond the way they did and the leadership with so many crazy things in the game. To go 94 yards against an unbelievable defense. Everybody on that defense for Ohio State's going to get drafted, probably most the backups and to go 94 yards to win it, you know, that's heart. That's character, that's culture and it was on full display tonight and I'm just super proud of them. There belief, their leadership and they got it done."