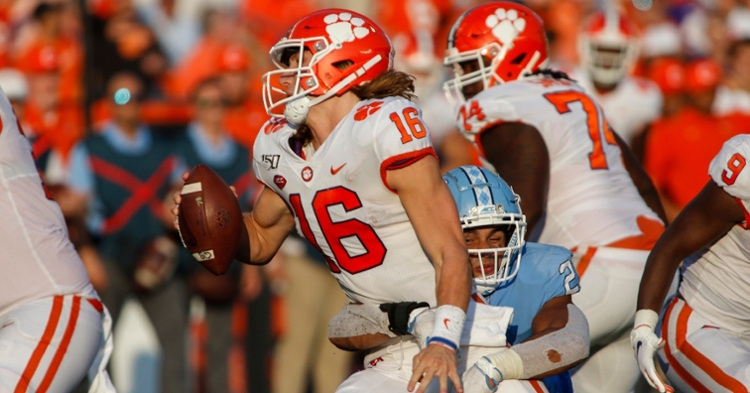 Clemson's first Playoff ranking is in.

Clemson isn’t a part of the College Football Playoff committee’s top-four for the first time since 2014.

Dabo Swinney’s Tigers checked in at No. 5 in the initial CFP ranking, behind Ohio State then LSU, Alabama and Penn State.

Only one team ranked outside the top-5 in the first CFP ranking has gone on to win the national championship (Ohio State in 2014, No. 16).

According to ESPN, despite a No. 3 ranking in their Football Power Index — Clemson has the eighth-best strength of record and a sixth-best mark in their ‘game control’ metric. That ranked behind other prominent Playoff contenders in Ohio State (No. 3 strength of record/No. 1 game control), LSU (No. 1 SOR/No. 5 GC), Alabama (No. 4 SOR/No. 2 GC) and Penn State (No. 2 SOR/No. 3 GC). Sagarin rates Clemson with the worst schedule of that group (64th) with one top-30 win and most comparable to Alabama (59th; same top-30 win over Texas A&M, on the road).

"Penn State and Clemson specifically are two outstanding teams," CFP committee chair Rob Mullens said on ESPN. "You guys already referenced the close game against UNC with Clemson. When you look at Penn State’s resume with wins over Michigan and at Iowa -- those are marquee wins...Penn State has been very consistent. I think they have held seven of their eight opponents to 13 points or less.

"Clemson is coming on and playing their best football but after week 10 the committee felt Penn State was a notch above."

It is a piece of it. When you are comparing resumes you look at every single game and that was a game. Equally for Penn State winning against a ranked Michigan and a ranked Iowa were key wins as well.

The Tigers were No. 3 in the Coaches Poll and No. 4 in the Associated Press poll this week after starting as the preseason No. 1 in each back in August.

Clemson has spent the second-most weeks in the CFP top-5 rankings all-time (25), only trailing Alabama (31) since its 2014 inception. Clemson, Alabama and Ohio State are the only three teams to be in each of the 32 CFP Top 25 rankings.