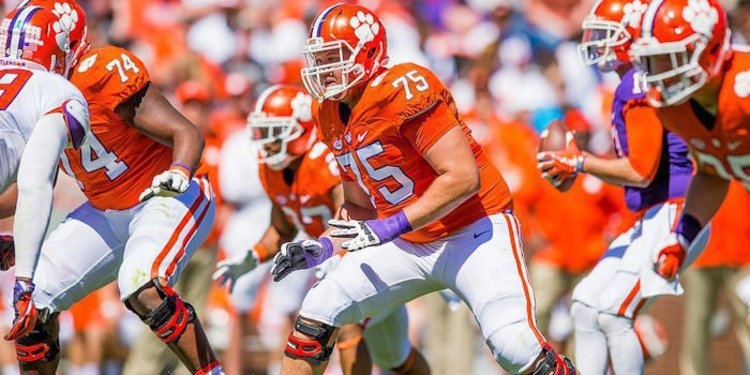 DALLAS (FWAA) – For their outstanding individual performances and for leading their teams to undefeated records through eight games and into contention for the College Football Playoff, Clemson offensive tackle Mitch Hyatt and Notre Dame defensive tackle Jerry Tillery have earned Outland Trophy National Player of the Month honors for October, as selected by the Football Writers Association of America and presented by the National Foundation for Infectious Diseases (NFID).

The Outland Trophy, presented by the National Foundation for Infectious Diseases, is awarded annually to the nation's best college interior lineman. NFID is presenting the trophy to help increase awareness about the importance of annual flu prevention. Getting vaccinated each year is your best line of defense against the flu. This is the first season the FWAA has selected national players of the month.

Hyatt, the Outland Trophy Offensive Player of the Month, should need little introduction for those following college football the past three seasons. The 6-5, 310-pound senior from Suwanee, Ga., was an FWAA second-team All-American last year and now has 50 starts in 51 games played at Clemson (8-0) that includes three consecutive seasons and five career games in the College Football Playoff.

Clemson's anchor at left tackle, whose uncle Dan Benish was an All-ACC defensive tackle on the Tigers' 1981 national championship team, was the leading vote-getter in the preseason All-ACC selection process. Hyatt has helped Clemson's offense approach record territory as it looks to earn a 9-0 record for the third time in the last four years (also 2015 and '16). The Tigers are attempting to tie a school record Saturday by scoring 40 points in a fourth consecutive game, and have won their last three by 60, 34 and 49 points. A 30-point winning margin Saturday would make this the first Clemson team to win four straight by 30-plus points.

The Tigers enter the week as the only program in the country in the top 10 in both total offense (522.6 yards per game, tied for eighth) and total defense (263.9, third). Hyatt and the rest of the offensive line have helped running back Travis Etienne get to the verge (845 yards) of a 1,000-yard rushing season as Clemson has posted 450 yards of total offense in six straight games. The Tigers' yardage differential (+258.7) is the best in the country. More specifically to Hyatt's left tackle spot, the Tigers have allowed only 12 sacks this season, and Saturday could post back-to-back games with no sacks allowed for the first time since 2012.

Hyatt has had a decorated and expansive career at Clemson – his expected 51st career start this Saturday against Louisville will extend his school record for career starts by an offensive lineman, and is one start shy of tying Clemson's school record of 52 for any position held by kicker Chandler Catanzaro. Hyatt was the first position player in Clemson history to record 50 career starts and will likely break the school record for career snaps from scrimmage against Louisville. The three-year letterman, with 3,343 career snaps, needs only 19 more to pass center Dalton Freeman (2009-12) for the all-time lead.

University of Wisconsin All-American Joe Thomas, the 2006 Outland Trophy winner who retired earlier this year after a stellar 11-year career with NFL's Cleveland Browns, is serving as the Outland Trophy #FightFlu ambassador on behalf of NFID. Thomas has been an avid supporter of annual flu vaccination and is making media appearances on behalf of the #FightFlu public awareness campaign to remind everyone 6 months and older to get an annual flu vaccine.