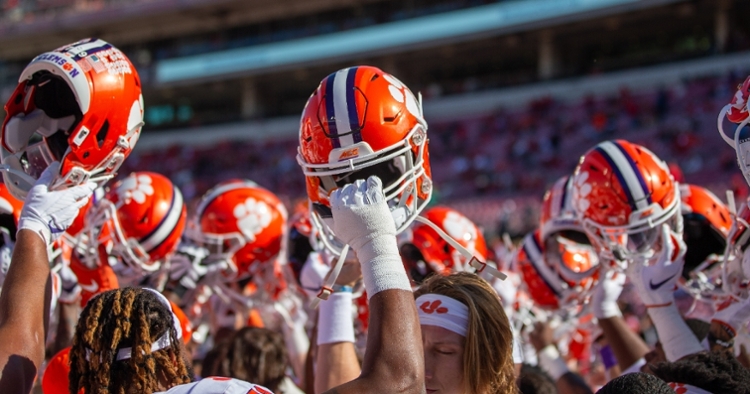 The City of Clemson is once again ALL IN! for a National Championship Viewing Party Monday, January 13th on College Avenue between Keith Street and Highway 93. This section of College Avenue will be closed starting at 5pm and will re-open at 2:30am. Cars parked inside the event site after 5pm will be ejected. Two large screens will be placed at midfield near the police substation and Judge Keller’s store. The broadcast area as well as all trees, streetlights, buildings, etc are considered neutral zones. Crossing barriers or climbing of any sort will result in an off-sides penalty, a loss of viewing yards, and a potential sanctioned fine. This will be a rain or shine event.

In this section of College Avenue only, the Open Container Law will be suspended between the hours of 7pm and midnight. Having an open container prior to 7pm will be termed a false start with the patron subject to normal fines. All alcoholic beverages must be obtained from a licensed alcohol establishment inside the perimeter; no coolers or alcoholic beverages may be brought into the gated area. Similarly, no alcoholic beverages may be taken out of the gated area. Attempting to bring alcohol into or take alcohol out of the established field of play will result in a stop of forward progress, and the patron will be ticketed where they went out of bounds.

Anyone carrying an alcoholic beverage outside, within the gated area, will be required to have a wristband obtained from the City of Clemson. Wristbands are free and will only be issued to persons who provide photo evidence they have achieved 21 years of eligibility. These bands may be obtained from one of four designated sideline tables, located at each end of College Avenue, the intersection of North Clemson and Sloan Street, and at Earle Street. Wristband distribution will begin at 5pm, though no alcohol will be allowed outside until 7pm. Wristband distribution will cease at 10pm. Under no circumstances will alcohol be allowed to leave a licensed establishment without a wristband. Any person consuming alcohol without a wristband will be considered an ineligible patron downtown and must return to the original spot of sale to finish their beverage before being allowed back in the field of play, resulting in a loss of viewing time. Anyone who fumbles their wristband during the course of the event due to circumstances common to the event will be given a sideline warning and must obtain a new wristband. Only wristbands distributed from the City of Clemson will be allowed on the event site.

Patrons must maintain control of their beverage and have at least one foot in the event site at all times. Anyone flagged for not having a wristband will be targeted by law enforcement and ejected from the event and will not be permitted to attend the first half of next year’s event. Any beverage brought outside must be put in a 16 ounce plastic cup. Absolutely no cans or bottles; as this is not a baseball celebration, pitchers – even plastic ones – are strictly prohibited. Failure to follow these guidelines will be considered an illegal substitution and will result in loss of possession.

Questions regarding wristbands or other event details can be addressed to Lindsey Newton at 653-2030.