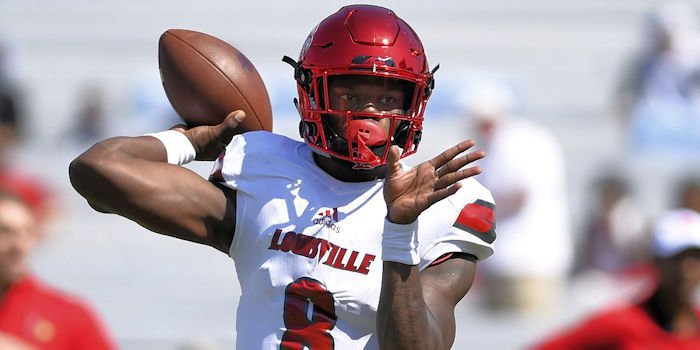 Monday morning after my radio show I was talking to Brad Senkiw, our station's new show host, about this Saturday's game, and he used a phrase I have never heard before. He said it will be interesting to see how the “Fighting Lamars” play this weekend.

To be clear Lamar Jackson is the best player in college football this season and I am not sure it is close. Jackson is the first player from a power five conference to throw for 300 yards and rush for 100 yards in back to back games. So far this season, he has completed 55 of 85 passes for 771 yards with five touchdowns and no interceptions. On the ground, he has 40 carries for 239 yards and three touchdowns. As good as he was last year, he has gotten off to perhaps a more impressive start this year.

A season ago Jackson threw for 3500 yards and 30 touchdowns and ran for 1500 yards and 21 more scores. In the epic game in Death Valley last season, Jackson put on a show against one of the nations best defenses. He was 27 of 44 passing for 295 yards with one touchdown and one interception and ran it 31 times for 162 yards and two touchdowns. Against FSU he torched the Seminoles for 63 points.

That being said, Jackson is human and can be frustrated. Last year Duke held him to just 181 yards passing and had a good chance of upsetting Louisville at home. In the 36-10 loss at Houston, Jackson was just 20 of 43 through the air for 211 yards and had 25 carries for 33 yards. LSU did an even better job on Jackson. In the Citrus Bowl, Jackson was just 10 of 27 for 153 yards with no touchdowns. He had 26 carries for 33 yards and no touchdowns in the bowl game.

Those great numbers were a part of a Heisman Trophy winning season when Louisville had nine wins. However, those results came with some good pieces around Jackson. Gone is Brandon Radcliff who rushed for 900 yards last season. The Cards lost their top two wide outs and the tight end who accounted for 131 receptions a season ago. The offensive line lost three interior starters, and freshman Robbie Bell has been exposed at center.

On defense, the Cardinals lost key players at all three levels. The front lost DeAngelo Brown. The leading tackler in Keith Kelsey is gone. The leading pass rusher Devonte Fields is gone. Josh Harvey-Clemens was the huge safety who is now gone from the secondary.

Perhaps the biggest storyline this weekend will be the availability of Jaire Alexander. The All-American candidate at corner missed the UNC game and may be questionable due to injury this week. You will recall that Alexander had two interceptions and a forced fumble against Clemson last season.

Through two weeks of the season, two things stick out to me regarding Louisville. First, Jackson is the best player in America. Second, he has very little help surrounding him. How Clemson chooses to defend this superstar will be extremely interesting.

Clemson has plenty of question marks remaining to be answered as well. Can Clemson go into a hostile environment in an 8 o'clock game that will host ESPN’s Game Day? Is Clemson mature enough to handle their business on the road?

The Fighting Tigers and this program get a shot at the Fighting Lamars Saturday night. This should be fun!