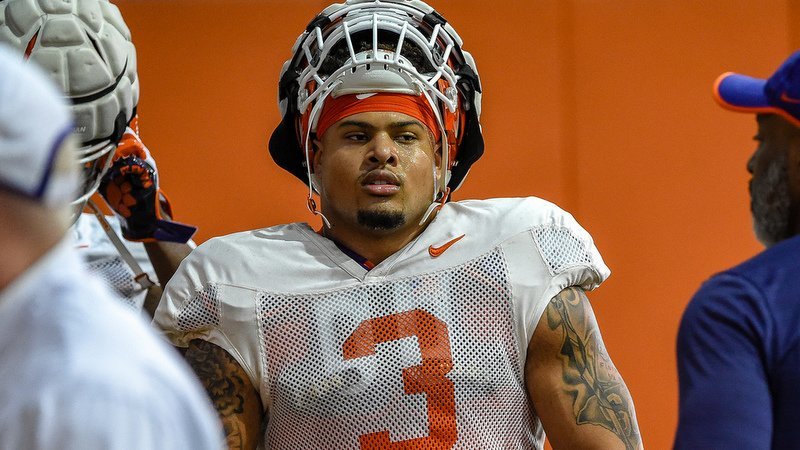 Xavier Thomas is shown at practice two weeks ago

CLEMSON – Xavier Thomas understands that he’s next in line as a game-changer at defensive end for Clemson, and he knows that the coaching staff and his younger teammates will be looking to him for leadership. He also understands he can’t force any of those roles and can only get where he wants to be through hard work.

Thomas is an explosive edge rusher who made an immediate impact as a reserve in 2018, earning near-unanimous Freshman All-American acclaim. Thomas played in all 15 games and was credited with 43 tackles (10.5 for loss), 3.5 sacks and two pass breakups in 304 snaps.

Gone are players like Clelin Ferrell, Austin Bryant, and Chris Register, and Thomas knows he will be counted on to carry on the tradition. A tradition that starts with hard work.

“It’s basically a tradition. You can’t get better without watching the film,” Thomas said. “It was left by Christian (Wilkins), Dexter (Lawrence), Clelin (Ferrell), Austin (Bryant), and all of those guys. They all left that tradition behind. Just getting in the film room and watching film and bettering our techniques. Learning from those guys and now picking up where they left off is going to be big.”

Thomas said he keeps in contact with his former teammates.

“They’ve told us about their experience at the combine and answered our questions about their [Clemson] experience,” he said. “I mean, we always keep in touch with those great guys. They’ve told me just to stay grounded, and the key is to be a leader, and I have to step in and be a leader now that they are gone.”

Thomas is usually reserved and quiet and is having to work on becoming more of a vocal leader.

“As time goes on, I have to step my way into that role,” he said. “I am working on being a more vocal guy because I normally don’t say much, but now I kind of have those younger guys behind me to lead.”

What has he worked on this spring?

“My approach is to come in and gain more knowledge of the game,” Thomas said. “Of course, I have talent, but it’s all about the fundamentals and technique.”

Thomas is only one part of a new wave of defensive line talent.

“Definitely some talented guys. At D-tackle we got Tyler Davis and Ruke (Orhorhoro) at DE,” Thomas said. “We got a lot of talent and explosiveness, so they are definitely going to improve.”