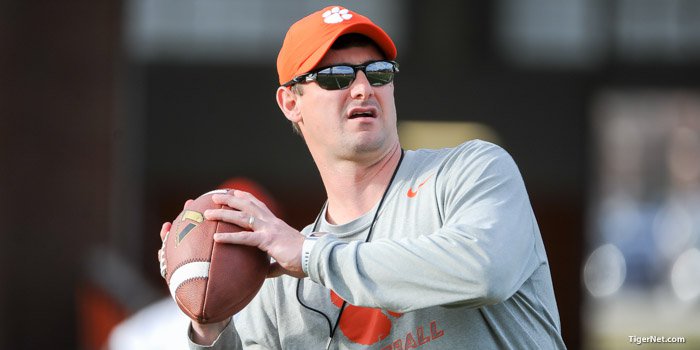 CLEMSON - During Wednesday's practice, one of Clemson's veteran receivers didn't run a route exactly the way head coach Dabo Swinney would like, and the former wide receivers coached barked out his feelings on the matter.

"You have to make every rep count," Swinney yelled. "If you don't do it right, there is another guy who will take your snaps."

Welcome to the competitive side of Clemson's receiving corps.

Co-offensive coordinator and wide receivers coach Jeff Scott met with media Wednesday evening after Clemson’s second practice and he said the first thing the coaches did was make sure the players were aware of just how many playmakers are on Clemson’s roster in 2016.

“That was one of things we did in our first offensive meeting Monday night. As we were going through some of our plans for the offense for the year and talking big picture, we had all of those skill guys stand up and I think we counted 31 skill guys in that room and all of them are very talented players,” Scott said. “We held one ball and said, 'Alright, we have one ball to go around.' We talked about our goals and our goal is to win every game, whatever that takes. There used to be a time at Clemson where we had one or two playmakers that were head and shoulders above everybody else and so we game planned to make sure those guys got the ball, but we really haven't had to do that the last two years. We've just let the offense go and get spread around and I think our guys appreciate that. It's a very unselfish group and a lot of that comes from the culture that Coach Swinney has worked very hard to create of no entitlement. I don't foresee that being a problem at all. I think all of our guys understand what our goals are.”

Scott then spent several minutes breaking down many of the receivers he’ll have at his disposal this season. 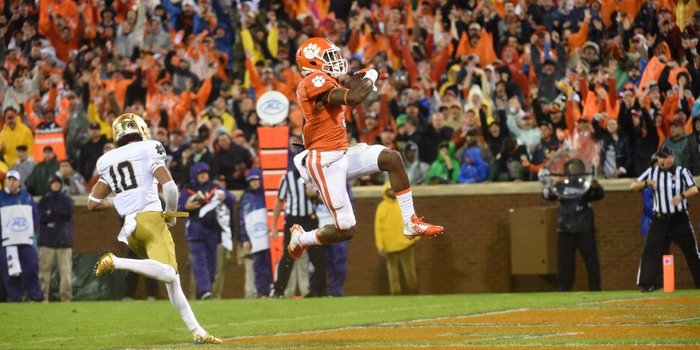 “Really pleased. I pulled him aside after our first practice yesterday and I just complimented him because I could tell the way he practiced yesterday that tells me what he's been doing all summer long. You can't go out there and have a good first day or second day just by trying to turn it on when practice starts. He's worked extremely hard. I think he's gained close to 14 pounds since last season. He looks great. He's as locked in as he's ever been. A lot more focused. He still has work to do and he knows that. He still has to earn his teammates' and coaches' trust and all of that, but he's doing that one day at a time. I'm very pleased and very encouraged with what I've seen so far.”

“First of all, he is healthy. I know that knee kind of bothered him through the end of the season and even into the spring. Second of all, he's a year older and he's really maturing and understands what it takes. He was a very talented player in high school and was able to kind of get away with a lot of things in high school. Coming to play at this level and competing against the guys he was competing against, he definitely has the skillset but he had to buy into all of the details and he's done that. I've been very pleased with Ray-Ray through the first two days. I can see marked improvement - the type of improvement you want to see from his freshman year to his sophomore year.”

“I think he has the chance to be as good as we've ever had come through Clemson. That's a strong statement for the guys who have come through here. He has that ability. The very first play in pass skele yesterday - the very first rep - the last time I saw a catch like that was DeAndre Hopkins going out at fall camp before his junior year. It brought back some good memories. Mike has great size, great ability to get down the field and tremendous ball skills. He looks as good or better than he's looked in his career at Clemson. Let's just see if he can consistently come to work and improve. I've seen a focus in him that I've never seen before and that's a really good thing.”

“I know he's very valuable for us. He's got a chance to be in top 10 in receptions in the history of the ACC just in three years. He's a very valuable weapon within our offense. He's got a lot of experience. He's been through a lot of battles. He's another one that I think comes to work every day with that right focus.”

“The biggest thing I've seen out of him is his quickness. He's got really good feet. He runs routes similar to Hunter Renfrow. He does a great job of playing low and being able to stick his foot in the ground and separate. That's what I see out of T.J. right now that has me most excited. He's going to have to get bigger and stronger and all of that and that will come, but the thing I'm most excited about him is the way he separates.”

“He's just a big guy. He's ready made physically. When he gets going on guys, he can really run. I think he surprised some people with how well he's run. The biggest thing for him is just figuring out the releases and being able to be quicker at the line. The more confidence he gets there, the better he's going to be. We went back to the locker room as coaches and we were like, 'Hey, we hit on all of these guys.”

"I've been pleased. Right now, it's a little bit hard to evaluate him, especially when we get into the team setting with all formations and motions. All of those freshmen are kind of swimming a little bit trying to keep up with the install, but the things you can see are in individual and when you run routes versus the quarterbacks on air and then in one-on-ones. You can see the ball skills. He's got good size. He's going to be a really big kid before it's all over. I've been pleased with what I've seen out of him so far, but he's still got a long way to go as most freshmen do. I'm very optimistic."

“Maybe it's easy to overlook a lot of guys when you have guys like Mike Williams and Deon Cain and Artavis Scott and Ray-Ray. I think everybody that kept up with college football last year was able to see the way that Hunter finished the season. I don't think he's going to surprise anybody. The early to middle part of the season last year, he surprised a lot of guys. I think he set the record for the most pass interference calls against him than anybody because he got down the field so quick and those guys didn't want to let him score a touchdown.”