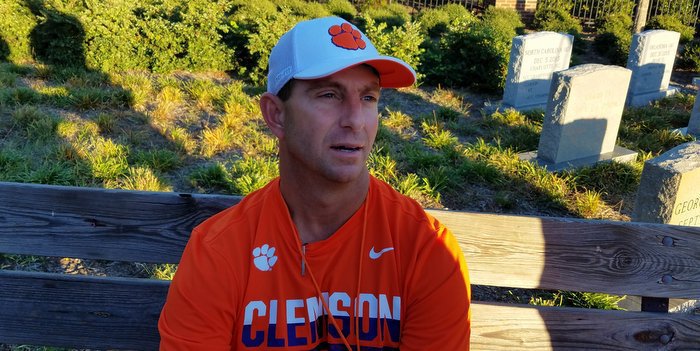 Adrian Baker has been cleared to return to practice

CLEMSON – It’s no secret that Clemson defeated NC State last Saturday despite turnovers and not playing its best game, but with Florida St. looming in a week head coach Dabo Swinney isn’t putting pressure on his team.

All he wants to do is reinforce the fundamentals.

The Tigers practiced for two hours Wednesday afternoon, will hold another practice Thursday and then take the weekend off before ramping up preparations for the Oct. 29th road trip to Tallahassee. It was a practice the Tigers spent on drill work.

“You can't work any harder than what we've worked at it. It's one of those things you do every day,” Swinney said after practice. “You reinforce the fundamentals. We've got a little extra time this week to do a little bit more drill work. The guys have been playing ball a long time. This isn't Pee Wee. These are grown young men and they know what they've got to do, so we just go back to work and play better next time. That's all you can do.”

Swinney said practices have been good this week.

“It's been good. On Monday, we kind of got back going and got our mind back focused. They were off Sunday,” he said. “We had a good, light practice on Monday and good, long meetings. Yesterday was meetings and community service. That was a great day. It was such a blessing for me to be able to experience that and for our team to be able to experience the Habitat opportunity.

“They really did a good job. We made that neighborhood smile when we left. It was great to be a part of that. Today was a tough day - meetings and full-pads practice. We got after it and a lot of individual and fundamental work. Good bit of good on good today. A lot of good work toward our next opponent. Just trying to get a good foundation in place so when we come back and get plugged back in to practice on Monday, we're that much further ahead.” 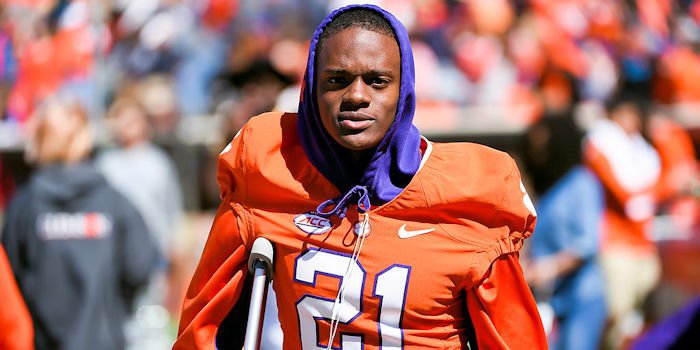 Adrian Baker has been cleared to return to practice "

Swinney outlined the plans for the rest week, and said he will spend time with the family of freshman linebacker Jamie Skalski. Skalski’s father passed away at the end of last week.

“It's not a normal week in that you're not starting from scratch. We've got a good balance of things. We're doing a lot of self-evaluating, self-scouting and studying each other,” Swinney said. “It's great to have a little extra time from a meeting standpoint to where you're not pressed from a game plan standpoint to be able to do some of those other things. It's good. Guys are healthy. Our spirits are good. Tomorrow will be another tough practice. We're actually going to meet in the morning and going to have some meetings and another good practice tomorrow afternoon and then they'll be off on Friday.

“The coaches are going to hit the road on Friday. I'm actually going to spend a little time with the Skalski family. I'm looking forward to seeing James Friday and his mom and sisters. The funeral for his dad is this weekend, so we'll continue to keep them in our prayers. We'll have coaches out. We're even going to have a couple of coaches out on Saturday at some of these schools that play on Saturday. Again, recharging up and getting ready to roll and see if we can make a strong five-week run to finish the season.”

The status of Jalen Williams

“He was ready to play last week. It just wasn't really his type of game. It was more of a Ryan Carter type of a game in there at nickel. It wasn't much for Dorian (O’Daniel) either. Sometimes, when you play that SAM backer position, you can get into some of these games where you're not going to have as many snaps as others just based on what they do and the personnel. He was ready to play and he'll be ready to go this week as well. He's practicing every day.”

“It’s going to be hard on him. The biggest thing for him is he's got to get his confidence back. He's back in practice. Right now, he's working every day on scout team because it's not like you put a guy back out there. We've got some good players and it just doesn't work that way where you just jump out there and you're the guy again. He's got to go back to work. He's been out a long time, so he needs some reps. He needs work, so that's why he's over on the scout team. He does all of the individual and some of the competitive stuff - the man-to-man. The biggest thing with Adrian and he'd be the first to tell you that he's not going to play until he's confident, number one. Number two, he's got to earn some opportunity. Those guys are playing pretty good, so that's just where he is. He's cleared. He's back in practice, but when he plays, I have no idea. A lot of that is with him and him being totally confident that he can cut it loose. That's not anything that anybody can control but him.”

"I think he's played great. Sometimes I think these guys think they have to tell y'all something. They think they've got to give y'all some kind of answer. These guys have played good. They've played outstanding. Mitch Hyatt is not a robot. He's had some moments where he's missed a play here or there, but he's played good. He played great last year, too. He's 21-1 as a starting left tackle. You don't win 21 games with a bad left tackle. He's pretty damn good, I'll tell you that. I understand he said he's average or something like that. That's not the case. Some of these young guys, dealing with y'all they think they've got to tell y'all something that's not accurate."

"Wayne is doing really good. We haven't really had that opportunity. Wayne never misses. He's the guy and he's been the lead role guy and it's the way the situation is now. He's earned that. He never misses practice so it might be a little bit of a benefit as we move down the road to put him on the shelf when we've got a little extra time for some of these guys to get a little bit more work. All of those guys have been getting work since camp but once you get into the season it's different. In camp, you're working three groups every day but once you get into the season you're work gets cut down because you rep two groups. There's only so much you can do and then the rest of it goes to games and then you evaluate from that.