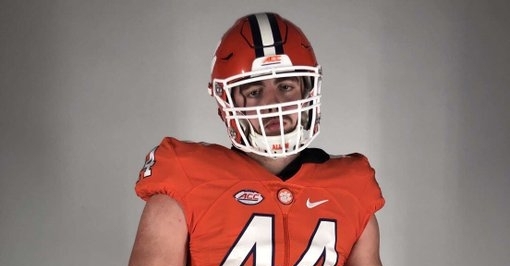 One of the top offensive line recruits in the 2022 class reported a Clemson offer on Monday, becoming one of the main targets for offensive line coach Robbie Caldwell and the Clemson staff.

Gunner Givens of Daleville (VA) Lord Botetourt has pulled in 27 offers early on in his recruitment, including Alabama, Penn State, and Notre Dame. The 6-6, 275-pound Lord Botetourt (VA) Daleville prospect is considered a priority offensive tackle for many teams in the ’22 recruiting cycle. A Clemson offer seems to hold a special place with Givens, and TigerNet caught up with Givens to discuss the offer and his recruitment.

Givens is being recruited by Caldwell and defensive coordinator Brent Venables. The conversations with the coaches go beyond football, but Caldwell has expressed what he likes about Givens on the field.

“We’ve talked about a lot of things, including non-football stuff like my family and things like that,” Givens told TigerNet. “Coach Caldwell likes the aggressiveness and that I play through the whistle. They are both amazing people and football coaches. We have built a small relationship but it’s continuing to build every day.”

After talking to Caldwell and Venables, Givens had a pretty good idea that an offer would soon be coming his way.

“I had a good feeling it was coming from previous calls with Coach Caldwell and Coach Venables,” he said. “The feeling was unlike anything else. Clemson just does things differently. They only offer a handful of people and the way they do things down there is just different. The feeling was unreal, still hard to believe.”

Givens had the chance to visit Clemson in March, and Clemson made a strong impression during his time on campus.

“My impression of it all is Clemson is elite at everything they do,” he said. “The facilities, campus, coaches, everything. The coaches made it feel like home. The facilities were top-notch as well as the campus.”

In addition to football, Givens also plays AAU basketball. Givens’ athleticism is evident to all of the coaches recruiting him, and offensive tackle isn’t the only position that Givens is being recruited for.

“I have offers at defensive end, tight end, defensive tackle, and offensive tackle,” Givens said. “Clemson even said if I maintain my weight and athletic ability I can play defense there. Georgia and some other schools have just offered me as an athlete for now to see how my weight plays out before I graduate.”

At this point in his recruitment, Givens is hearing from many of the top teams in the college football world. While there is still a long way to go, Givens expressed that Clemson will be a top contender in his recruitment over the next two years. What is Givens looking for in a school? And what makes him a highly-recruited player?

“Relationship with coaches and players, and player development,” Givens said about his factors in picking a school. “All coaches like a respectful, coachable, work-horse type of guy.”

Givens has posted impressive numbers in the weight room as a sophomore, squatting 500-pounds for 5-7 reps and maxing out at 300-pounds on power clean and 365-pounds on bench press. Givens is a long and lean offensive tackle, showing off rare athleticism at the tackle position. Givens played his freshman season at tight end, where he put on full display his ability to get out in space and take his blocking assignment completely out of plays.

Thank you @ClemsonFB for an amazing visit pic.twitter.com/Vlx0ercIRl