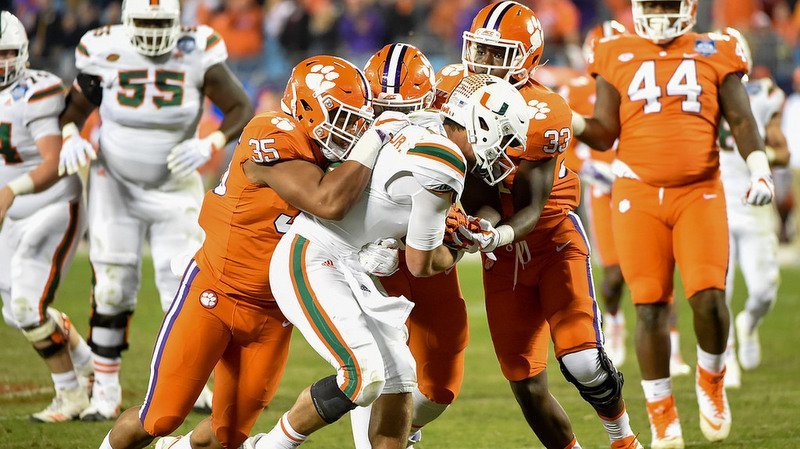 Clemson’s defense is peaking at the right time.

No. 1 Clemson dominated Miami in Saturday’s ACC Championship Game, and the game took on a familiar form for the Tigers. Clemson got ahead early, the defense was dominant and a bevy of younger players was allowed to finish the game.

Defensive coordinator Brent Venables’ name has been mentioned in several coaching vacancies across the country, and with good reason. The 2017 defense is ranked sixth nationally and is giving up almost six points per game less than last season and 34 yards per game less than the 2016 squad.

In the win over Miami, the Hurricanes were just 3-for-16 on third down and just 110 yards through the air.

"Oh, our guys just played really well. Our guys have been in a bunch of big games and that's experience in a game like that,” Venables said. “Our guys were very, very focused and very well prepared and just had a hunger and focus and toughness to them that's hard to overcome. We couldn't coach them hard enough and they were coaching themselves pretty good on the sideline but just from the onset, there was a hunger and a focus that didn't matter what happened, they weren't going to be pleased."

Clemson’s defense set the tone early. A muffed punt and turnover gave the Hurricanes the ball deep in Clemson territory, but Miami was forced to attempt a field goal, and that was missed.

“Yeah that was huge in the game, an opportunity for Miami to get some momentum and make it competitive,” Venables said. “Our guys were very determined and we've got a very tough-minded group of guys that love to compete, like adversity, they respond when their backs are against the wall and we've just got a bunch of players. They like each other with trust, love, passion for what they're doing and there's no self-indulgence, no entitlement, no egos, a very confident group of guys and very disruptive. Whether it's Ryan Carter on the back end or Dorian O'Daniel in the second level or all those creatures up front that make it very tough to handle."

Was it the best performance of the year?

"It's one of them. It was one of them,” Venables said. “We've had some really good performances and we started the season with a great one and it's the end of the regular season and we're not in the playoff yet and ended with another great performance but it was outstanding and really fun to watch and really really proud of those guys and our assistant coaches."

Venables said the defense – finally getting healthy – is hitting its stride.

"I really do over the last few weeks. We noticeably have gotten better and better and have hit our stride,” he said. “We're getting healthier as well and I think having two starters out as well with Tre Lamar and Mark Fields is a former starter ,but Dexter Lawrence might've played one of his better games and was 75-80% and just the intelligence and chemistry and understanding of what each other are doing, it's really showing up."

The younger players are gaining experience and making an impact.

"We've got a bunch of guys. K'Von, Isaiah, A.J. Terrell, Trayvon Mullen, all again young guys and some of them starters and still weren't starters until this year, and you've got guys like Justin Foster who's coming on,” Venables said. “Some other young guys inside like Nyles Pinckney, who's getting the most extensive time in his career, Albert Huggins, Jabril (Robinson), so it's fun to see and it's fun to watch all the older guys pull for them and coach them up and in a game like this we're not playing junior high school out there. You're playing Miami and the Coastal champs, so it's good to get young guys out there and get experience out there and they've been really pivotal in our success this year. It's fun to watch."