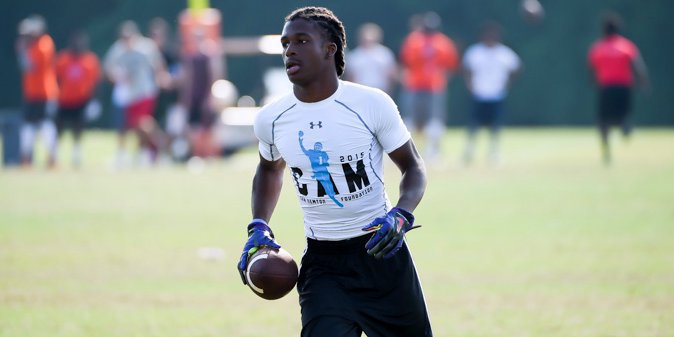 It’s not often that Clemson dispenses an offer to a freshman, but the coaching staff clearly saw something in Tyus Fields that made them offer the 2019 prospect last May.

The Tigers were the first, however, and Fields told TigerNet that while he’s humbled with the offer he also realizes there’s a lot of work to be done.

“It meant a lot to me. I just really look at it as a humbling experience because it was so early,” Fields told TigerNet earlier this week. “I look at it as motivation for me to keep doing good and getting better.”

Being the younger brother of a current Clemson football player means that Fields is already very familiar with the Tigers’ coaching staff, making his time at Dabo Swinney’s high school camp earlier this month all the more enjoyable.

Fields’ relationship with Reed couldn’t be better, and he said that he already felt like one of Reed’s defensive backs.

“It was real easy,” Fields said of working with Reed. “He told me the things that I need to continue to work on and get better at. It was pretty much like me going into the college. It was a smooth transition going there because we already know each other. We have a good connection and it was just easy.”

One thing that stands out to 5-10, 170-pound prospect is the amount of work the players and coaches put in each and every day.

“The work ethic that the guys have to put in is what stand out the most,” he said. “The work that they put in got them all the way to the national championship, so the work ethic stands out a lot to me at that school.”

Mark echoes that sentiment every time he talks about his experience at Clemson.

“He tells me that it's a lot of hard work and that you have to keep your mind straight. It's a good place, and you have just to stay humble there,” he said”.

While the recruiting process is just starting for Fields, there’s already a school that stands above the rest.

“I kind of like Tennessee, but you know it's really early so I'm just going through the process and looking at every school,” he said. “I'm going to come up to Clemson for some of the games during the season and then my plan is just to have a good football season and make it up to a few Clemson games.”

Fields - who had 31 tackles and an interception during his freshman year – described his playing style as fast and physical.

“I'm a physical player. I feel like I'm fast, and I can provide a lot for a team,” he said.