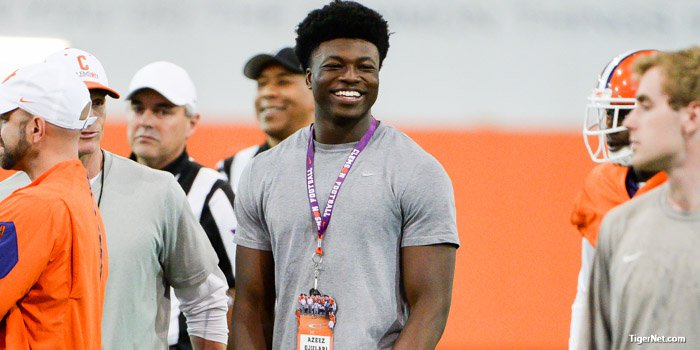 Ojulari at a Clemson practice earlier this spring

Brent Venables and Mickey Conn made one Georgia linebacker very happy this week.

Venables, Clemson’s defensive coordinator, made the trip down to Marietta (GA) earlier this week with area recruiter and defensive backs coach Mickey Conn to check in with 2018 4-star outside linebacker Azeez Ojulari, and they didn’t leave before extending a verbal offer.

“I’m very excited about it. It happened this morning. I was taking a milestone test, and my coach told me Clemson was coming to visit, so I knew they were coming to my school, but I didn’t know they were coming to offer,” Ojulari told TigerNet. “I was taking a test, and when I was finished we were allowed to use our phones, so I see Coach Venables, and Coach Conn messaged me and told me they came by to offer me, so I was all happy.

He then said he is building a solid relationship with Venables that goes beyond football.

“I keep up with them. I went up there for a visit, and it was great,” he said. “Coach Venables is always hitting me up on Twitter, and I always message him back, so we’ve been talking for a while. I’ve been talking to Coach Conn a lot, too.

“He always checks on me to make sure I’m straight. There’s more than just football. I like the family culture at Clemson. I remember my first visit, and it was great. It’s all about family, and they care about you there.”

Ojulari made the trek to Clemson for one of the Tigers’ spring practices, and while he was there, he got to check out the new football operations center.

“It was great. I got to go down the slide, too,” he said. “It was so fast. I didn’t think it would be that high. I had on sweatpants, so I went a little faster. Everything was great about it.”

Ojulari has offers from Alabama, Auburn, Florida, Florida St., Georgia, Notre Dame, Tennessee and Virginia Tech among others, but says the Tigers will be in his top group.

“The culture. The family culture,” Ojulari said. “All in. How everyone there is so welcoming and is like family. They care about you. They stand out more than the other schools.”

He said he hopes to make it back to Clemson for a visit either over the summer or for an official visit during the season.