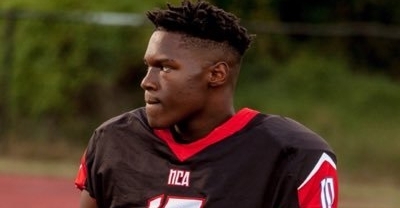 Goodwine is set to make his collegiate decision.

One of the Tigers’ top defensive targets for 2021 is close to making a decision, and he thinks he looks good in orange.

Four-star defensive end Monkell Goodwine (6-4 260) of Fort Washington (MD) said Sunday night he has made his college decision and he will announce his choice on August 15th online. The date is special to Goodwine -- it's the date his brother passed away.

Goodwine has a final five of Clemson, Alabama, Texas A&M, Arizona State and Kentucky. He said he has notified the school he will commit to, and the only other people who know are his mother and coach.

And what were some of the key factors that led Goodwine to choose the school he did?

“The relationship with me and the coaches, and I’ve been to that school before,” Goodwine said. “When I went to that school, it was nothing but love from the team, from the players on the team and the coaches. I just had a lot of fun. On top of that, I feel comfortable there. And they send players to the league as well. And the coaches that I know that’s going to be there, they are going to stay there for a very long time.”

Goodwine visited Clemson the spring of his freshman season when he and some teammates stopped in to watch a practice. From that point, he’s always had high interest in the Tigers.

“Clemson produces NFL players, especially from the D-line,” Goodwine said. “For them to be the top team in their conference is big. They’ve got the best coaches. You’ve never heard of any coaches leaving. It’s the same coaches that stay there for like 10 years. Coach (Dabo) Swinney does his thing with his team. Coach (Brent) Venables does a great job at what he does. It’s a hell of a coaching staff, and they coach the hell out of their players. On top of that, they work hard. And, who doesn’t love orange, you know?”

Asked if he thinks he looks good in orange, Goodwine replied with a laugh and said, “Yeah, I definitely do.”

Clemson has had an on and off recruiting relationship with Goodwine. He said the Tigers were on him hard during his junior season, then things just cooled between them.

“They recruit differently from other colleges,” Goodwine said. “I stopped caring about Clemson. When Korey Foreman decommitted, that’s when they started opening their recruiting back up for D-ends. They took one D-end, but they are looking for a D-end that’s going to be big, like over 260 pounds. I opened my recruitment to them back up and everything just went swell from there.”

An ankle injury limited Goodwine to just five games last season. He still managed 48 tackles and four sacks. He said what coaches love about him is his speed rush coming off the edge.

Goodwine attends a private school in Maryland, National Christian Academy, and while public schools won’t play football in the fall, his school will play five games. And then five more in the spring. However he plans on graduating early.

In the 247Sports Composite, Goodwine is ranked the No. 9 strongside defensive end nationally and the No. 4 prospect in Maryland in the 2021 class.