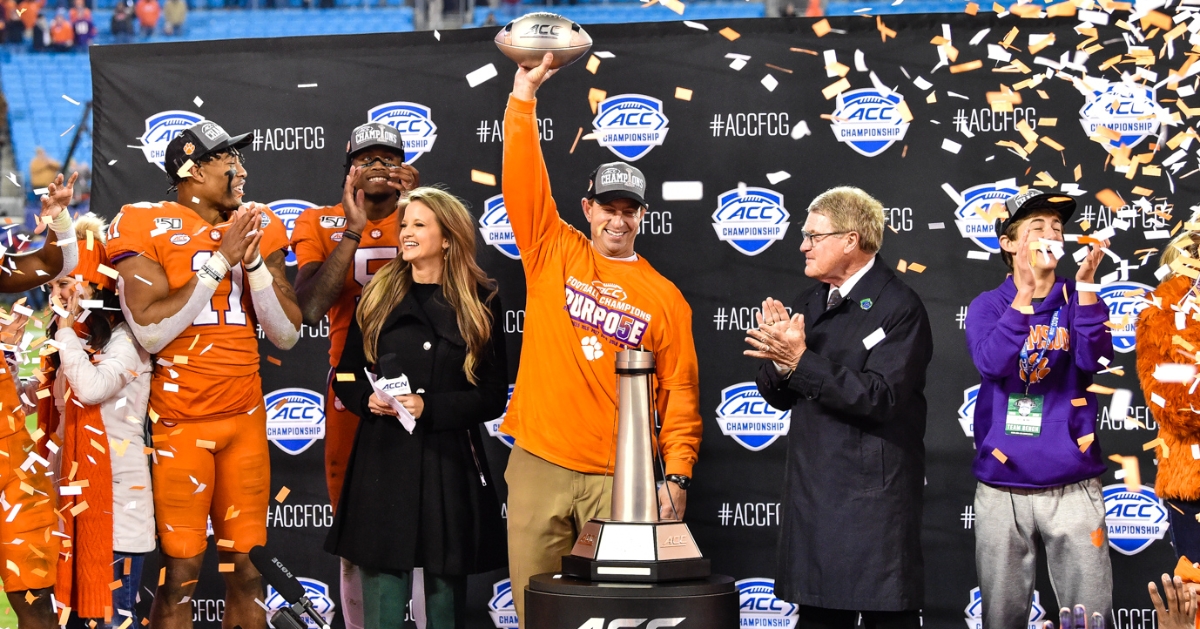 It’s time for college football, and as the Clemson Tigers take aim at another 10-win season, an ACC Championship and a berth in the College Football Playoff, it doesn’t hurt to take a look at some of the numbers the program has put up in recent seasons.

The numbers are historic, and taken as a whole or just in part, show the dominance of Dabo Swinney’s squad. Courtesy of the 2020 Clemson Football Media Guide.

Clemson’s recent success on the field has been particularly pronounced in the midst of Clemson’s five-year streak of College Football Playoff appearances since 2015. Clemson leads Alabama for the most wins in the country during that span, while the teams have each won two national championships during that time frame.

Clemson has won 22 ACC games in a row, counting ACC Championship Games, with the last loss coming at Syracuse in November of 2017. The ACC record for consecutive conference wins is held by Florida St., with 29 from 1992-95. The Seminoles also have a 27-game streak, from 2012-15. If the schedule is played as it sits now and Clemson remains undefeated, the Tigers would tie the record at Notre Dame in early November and then set the record at Florida St. the next week. It’s interesting that the record could be broken at Doak Campbell, considering the Florida St. connection. Doak was also the site of the Noles’ 29th consecutive win in 1995, and it came in a win over Georgia Tech. They lost at Virginia the next week.

Clemson has won 43 of its last 45 contests against ACC opponents, including ACC Championship Game victories against North Carolina (2015), Virginia Tech (2016), Miami (Fla.) (2017), Pittsburgh (2018) and Virginia (2019). Clemson has won its most recent game against every ACC team and owns a streak of at least two wins against 12 of the 13 squads.

Clemson has reached 12 wins in five consecutive seasons, the longest active streak of 12-win seasons and one of only four such streaks in major college football history, joining Alabama (five from 2014-18), Penn (seven from 1892-98) and Yale (five from 1888-92).

Even at lower thresholds, Clemson’s streak of success would remain impressive. Of the 130 active FBS schools, only 30 programs won at least six games in all five seasons from 2015-19. That number dips to 12 when pushing the win total to eight, and drops all the way to four (Clemson, Alabama, Oklahoma, Ohio State) when setting the bar at 10 wins.

With another 10-win season in 2020, Clemson would become only the third program in FBS history to produce a “double-double,” or double-digit wins in a double-digit number of consecutive seasons. The record for consecutive 10-win seasons is 14, set by Florida State (1987-2000). Alabama is the only other program with an active streak of at least nine straight 10-win seasons. The Tigers have 16 10-win seasons in school history, with more than half coming in the last nine years under head coach Dabo Swinney. The 2019 season was Clemson’s sixth with at least 12 wins, with Swinney sitting at the helm for five of them.

FIVE LEAGUE TITLES IN A ROW

Clemson won its fifth straight ACC championship in 2019, as the Tigers and the Oklahoma Sooners both became the first programs in an active FBS conference since the 1971-75 Alabama Crimson Tide to win five consecutive outright titles.

Clemson had already been the first ACC school to win four outright titles in a row prior to extending the streak to five in 2019. Florida State was a champion or co-champion nine years in a row from 1992-00, but never won more than three outright in a row. Clemson’s success in the conference championship game era is unprecedented, as in 2019, Clemson became the first school since the formation of conference championship games in 1992 to win five consecutive conference title games.

POWER OVER THE POWER FIVE

Early in his head coaching tenure, Dabo Swinney laid out his belief to then-Clemson athletic director Terry Don Phillips that the Tigers needed to add tough non-conference challenges on top of their tests in ACC play to serve as a foundation for the program’s growth. “I had a conversation with Terry Don and said, ‘Terry Don, I know we are not very good right now, but we need to play people because that is going to help me teach and help me develop the culture and the mindset that you have to have to win at the highest level,’” recounted Swinney. “I didn’t think we had that, and that’s what we committed to. That’s what we’ve done.” That scheduling philosophy and culture change has resonated in the Clemson program, and since 2013, no team can claim more wins against Power Five Conference opponents than the Tigers.

Head Coach Dabo Swinney’s run of excellence in his decade-plus at Clemson has placed him in the company of college football legends. Swinney enters the 2020 season with a winning percentage of 80.7, sitting as one of only 13 head coaches in history with at least 10 seasons of FBS head coaching experience to post a mark of .800 or better.