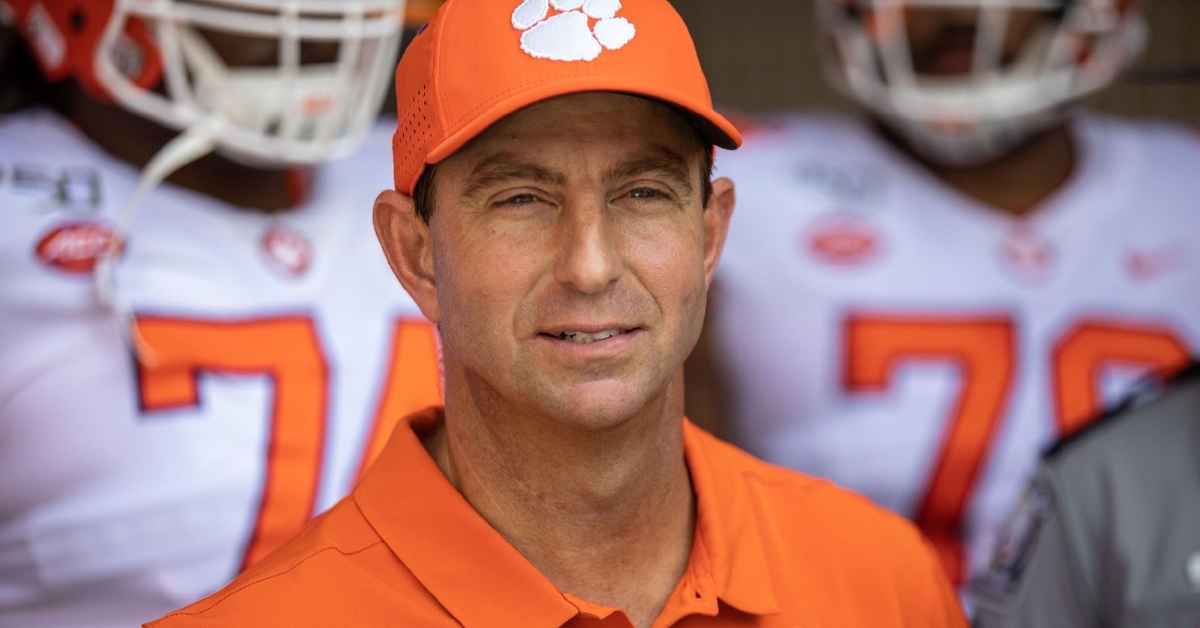 CLEMSON – The calendar turning to November means it’s time for the Championship Phase of the season, and it starts with a home game against in-state FCS foe Wofford and Military Appreciation Day.

The Tigers and Terriers tangle at 4 p.m. Saturday (ACC Network) in Death Valley.

“It's going to be an awesome week. This is always an unbelievable week with our Military Appreciation,” head coach Dabo Swinney said during his weekly Tuesday press conference. “I don't get to see everybody but I can't imagine that anybody does it better than Clemson, especially with our history and tradition and Memorial Stadium. It's going to be awesome. We've got a General coming in to speak to the team on Thursday, so I look forward to that. It's always a great week. It's hard to believe that we've only got two home games left, special opportunities. This is going to be another one this week.”

Swinney said playing in-state schools is good for everybody.

“Look forward to playing Wofford. They're a local school and it should be a fun day,” he said. “I'm sure they'll bring a lot of fans as well. It will be a fun day. We've played one of these games every year - in-state. I think it's been really good for our state. It's an opportunity for both teams. Looking at Wofford, not really excited about having to stop them. They do a great job, incredibly well-coached. Everybody thinks of Wofford and they think of the option. They are an option football team but they have a unique way of getting to it. They don't just line up and run the triple option. They're mostly in the shotgun and lots of different personnel groupings and lots of formations, lots of misdirection.

“They know what they're doing and they force you to be really disciplined. You can't try to do too much. They don't throw the ball a lot. They can get some guys open on you in a heartbeat. They force a lot of space plays and they have some guys who can make you miss in space. Defensively, same thing. I think there are 125 FCS schools and I like to see where they rank nationally against their peers and their 16th in scoring offense, 24th in scoring defense, No. 2 rushing offense in the country, 13th rushing defense in the country and 11th in the country in total offense and total defense.”

Swinney said he knows the Terriers will be ready to play and he wants the Tigers to continue their positive momentum.

“This is a really good FCS team that I know will be pumped up and excited to play Clemson. For us, it's really just about playing well and continuing to build the momentum that we've had,” Swinney said. “I think after eight games, we've had an excellent season. We've played some good football all year long. To be 8-0 is where we wanted to go. We're clicking into November now and that's what we call our Championship Phase - an opportunity to compete for our division. We'll have our state championship. If you win the division, you get a chance to play for the ACC and that's really what we focus on. Whatever comes from the postseason comes. It's an exciting time. I'm proud of our team.

“I know this is a team that doesn't necessarily match up well with us on paper but as I always say, you don't play the game on paper. You play the games and there is plenty of history of FCS teams beating FBS teams. We just want to continue developing our team and playing well. That's our objective this week.”

Swinney was asked about the 2011 game against Wofford when the Tigers and Terries were tied at 21 heading into the half in a game Clemson would eventually win 35-27.

“Getting booed coming off at halftime. Everybody telling Coach (Chad) Morris to go back to high school. I heard that one a couple of times,” Swinney said. “It's why I shouldn't hire a high school coach, I heard that one a few times. That's probably what I remember more than anything. I remember them having the most open guy in college football history - that big tall, white kid that caught that ball. He literally backpedaled to catch it and then backpedaled to the endzone for 50 yards. He probably should've gotten an ESPY that year for the most wide-open wideout. That was a tough day. They had a big ol' running back. He was a great player. He was a sledgehammer, fullback.

“We won, I remember that more than anything. We played a little better in the second half. We were trying to figure out who kidnapped our quarterback. Chad was about to go crazy in the locker room. 'I don't know what happened. The quarterback...I just don't know.' Tajh settled in and we got it going in the second half. They played us tough. That's the way it is. Alabama and The Citadel last year, it was 10-10. These games aren't easy. Everybody thinks you just roll out there and win but you have to play well, especially when it's these teams that it's their scheme that kind of neutralizes you a little bit and it's advantageous in games like this. It will be a good challenge. We just want to go out and continue to play good, clean football and continue to build momentum.”