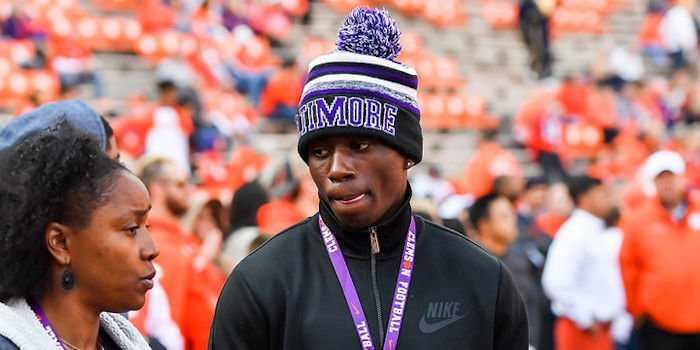 Lyn-J Dixon on the sidelines at a Clemson game

Elite running back Lyn-J Dixon has been atop Clemson’s recruiting board since July and with his recruitment back open the Clemson coaches hope they move to the top of Dixon’s list.

The Butler (GA) Taylor County back – a 4-star by ESPN and 24/7 and is listed as the No. 168 prospect in the ESPN 300 – committed to Tennessee in June but opted to re-evaluate his options after the Vols’ 15-9 loss to South Carolina last weekend.

Dixon told TigerNet Tuesday that the chatter about head coach Butch Jones’ future at Tennessee combined with conversations with his parents and a lot of soul-searching led to his de-commitment.

“I decided to open my recruitment back up when I started hearing about coaching change at Tennessee,” Dixon told TigerNet earlier this week. “What led to my decision was sitting talking to my family about it. I just really want to take my time and see what's best for me. I’ve been to games at Alabama and Tennessee, but I don’t know what visits I’ll take next.”

Despite his commitment to the Vols, the Clemson coaches have remained in contact with Dixon.

“I have a good, strong relationship with Coach (Tony) Elliott,” Dixon said. “The Clemson coaches stay in contact with me a lot. They just tell me to keep my head straight and make the decision that's best for me.”

Dixon’s last visit to Clemson was in July for the All In Cookout and he said he could see himself playing for the Tigers.

“The family atmosphere and how everyone gets along is what really stands out about Clemson,” he said. “They have a very good program that will get you where you want to be and I could fit because they run pretty much the same offense as my high school, which wouldn't be a problem to learn plays.”

While Dixon doesn’t have a list of favorites he said he’s hearing from Clemson, Louisville, Oklahoma State and Tennessee the most. When he makes his final decision in January, the school of his choice will have the following.

“I want a school with a coaching staff with a good atmosphere surrounding it and some good amount of playing time,” he said.

Dixon has only played in four games this season due to injury but has tallied 454 rushing yards on 48 carries – a 9.5 yards per carry clip –and seven touchdowns.

During his career, he’s carried the ball 604 times for 4,980 yards – 8.2 yards per carry. In his career he has 69 rushing touchdowns and 18 games with 100-plus yards on the ground. He’s added 70 receptions for 1,024 yards and nine scores. He’s also returned four kickoff and and three punts for touchdowns.