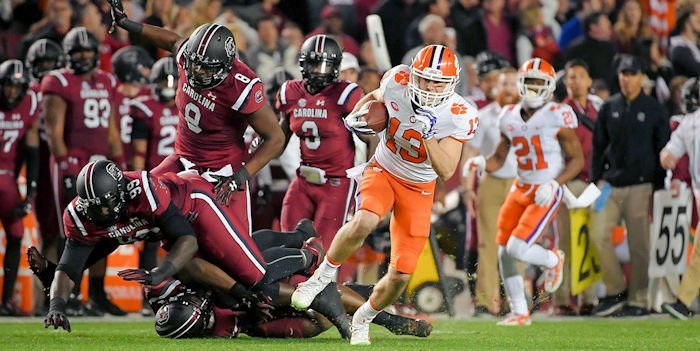 CLEMSON – Jeff Scott has lived on both sides of the Clemson and South Carolina, and he’s seen the good and the bad. Welcome to Rivalry Week in the Palmetto St.

Second-ranked Clemson plays host to South Carolina at 7 pm Saturday in Death Valley. The Tigers are chasing a 12-0 regular season record and a fifth consecutive win in the series, while the Gamecocks are out to not only ruin Clemson’s playoff chances but improve their own bowl status.

Scott has seen both sides of the heated rivalry.

“I believe this will be my 25th year being a part of this rivalry either as a coach's kid or a player or now a coach,” Scott said Monday. “So, I've been on the sidelines in some capacity going on 25 years. It's something I always look forward to and it's one of the best rivalries in college football. It's a very emotional game. Being around this state you're either a Tiger or a Gamecock, and both sides are very passionate about their team, which is what makes college football great.

“That is what makes college football so great is that the fans are so passionate, and in this state, the fans are very passionate for this side. As a player and coach what you try and take from it is that it's a very emotional game but emotions don't win the game. The team that wins this game most of the time is the one that executes best and has that focused intensity.”

Scott said the Gamecocks’ five-game winning streak in the series is still fresh in his mind, and many of the Clemson players will learn the importance of the game this week.

“That wasn't that long ago that we were in that position and that was something we knew we would have to turn,” Scott said. “Coach Swinney does a great job of letting the players know how important this game is. Some of the freshmen coming in - guys like Justyn Ross - he will find out. The fact that it takes up one of our five team goals lets our guys know how important it is.”

Scott was on the other side of the rivalry when his father, Brad Scott, was the head coach at South Carolina (from 94-98).

“The story that I will always remember is a Friday morning that I woke up in Columbia and came outside to get the paper out of the mailbox, and there were three huge Tiger paws painted on my driveway,” Scott said with a laugh. “I went and got my mom and brother - my dad had already gone to work - and I was like, wow, they are pretty serious about this. And last year somebody fessed up to me and my dad that they are the ones that painted the driveway. The impact of this rivalry - I've seen it from both sides.”

As a player, Scott said his best memory is the 2000 game when kicker Aaron Hunt drilled a 25-yard field goal to win the game. A Rod Gardner catch set up the game-winning kick.

“My best memory as a player would be my redshirt freshman year and having the opportunity to go out and hold for the game-winning field goal. I saw a little bit of the video of that and didn't remember all of it,” Scott said. “What I do remember is where the ball was lined up. I think South Carolina called a timeout to try and ice the kicker, and I went over and told the kicker, Aaron Hunt, I said, 'You realize where we are right now. This is exactly the spot you kicked your last three field goals when we would work out in the spring and summer and go over to the stadium. This is pretty special.' That was definitely a special moment. As a coach, I would say two years ago, having a lot of success and Mike Wiliams being from South Carolina and having the success he had was a great time and a great memory.”