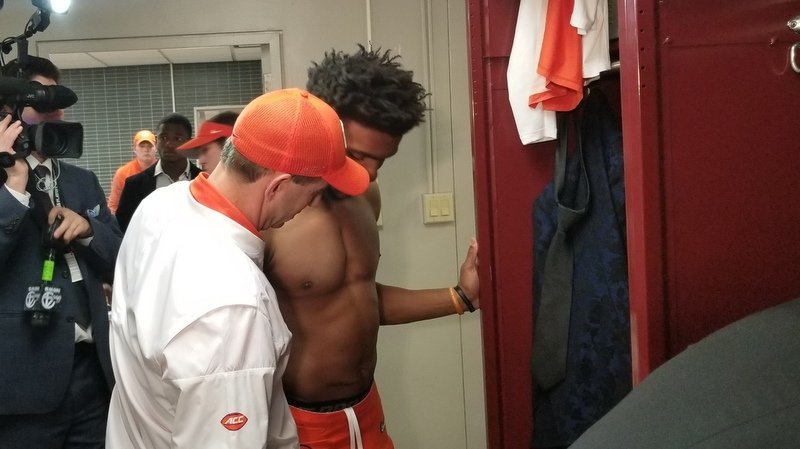 NEW ORLEANS, LA – Clemson head coach Dabo Swinney moved through the postgame locker room, hugging players and offering a few words of encouragement to each one he came to. For some, it was the last game they would play in a Clemson uniform, and tears were plentiful.

While some players will move on, the core of the team that reached the College Football Playoff semifinal will return, and next season the Tigers will field another team capable of challenging for a National Championship.

In many ways, the Tigers might have been a year ahead of schedule after losing so many quality players off of last season’s title team.

Alabama dominated Monday’s Sugar Bowl from the outset, a learning lesson for a young team that figures to be better next season.

“We will bounce back. We will learn from it,” Swinney said. “For us it's always about what is next. And this is a disappointing end to a good season. 12-2, a 12-win season, another ACC championship, and another playoff opportunity. And the lesson is, again, championship football is a few plays and a very small margin for error. And you have got to be able to run the ball effectively and take care of the ball. And we didn't do those things tonight. And you're not going to beat a good team like Alabama when you don't do that, especially some of the mistakes that we had in the special teams as well.”

Swinney was asked how he would like for this year’s team to be remembered, and he said it was one of the best teams he’s coached.

“They had a heck of a season. I mean, it didn't end the way we wanted it to. You're never happy when you don't win that last game,” Swinney said. “But at the end of the day, when you step back and take it, this is a disappointing moment, man. This is not what we came here to do. We put a lot of work into this and didn't get it done. So it's very disappointing. But at the end of the day, when you take a deep breath and you step back a little bit, this will be one of the best teams that we have had. I mean, this has been a remarkable team. It really has. You look at what Kelly Bryant has done this year, his first year playing quarterback. We had a lot of young guys step up. I thought our defense had a chance to be really, really special and they were. And, offensively, it was going to be a group that was going to have to grow and get better.

“And we, obviously, lost a lot of guys. But this has been a fun team to coach. I have thoroughly enjoyed being around this group of guys. They have been easy to coach. They have come to work all year. They have had an unbelievable attitude and work ethic and belief. And it's been fun. They really have -- again, this was a bad night. But that doesn't change how I feel about the type of season. It's hard to win 12 games. And certainly with 130 teams, there's hard to make it to the playoff. And these guys earned that. We earned a butt-whipping tonight as well. But we also earned 12 wins and three ACC championships in a row. And especially those seniors. To see those guys win 50 games in their career and 40 in the last three years, it's been a heck of a run. So we have not lost a lot of games. So it's really disappointing when you have to kind of process that when it happens.”

The coaches and players will return to Clemson and start working on the 2018 season.

“I tell our guys all the time, it's always about what is next. And we're going to learn and grow and always get better. And my expectation is to be right back here next year, right back in the middle of it, right back in the thick of it,” Swinney said. “We have got a heck of a team coming back. We're going to have a much more experienced team next year than we had this year. And they will be eager to get back to work. So our season is ending the earliest that it has ended in a while.

“But we will take a little time and decompress a little bit. School starts back for us on the 10th. We will have a team meeting on the 11th. We will have our banquet on the 13th. I'm really, really excited about honoring these seniors in a proper way as opposed to a very disappointing locker room. We will catch our breath, and we will get our perspective where it needs to be. And I will be excited to get back to work and start over, new journey, and, again, go see if we can finish a little better next year. But at the end of the day, there aren't many 12-win teams in the country.”