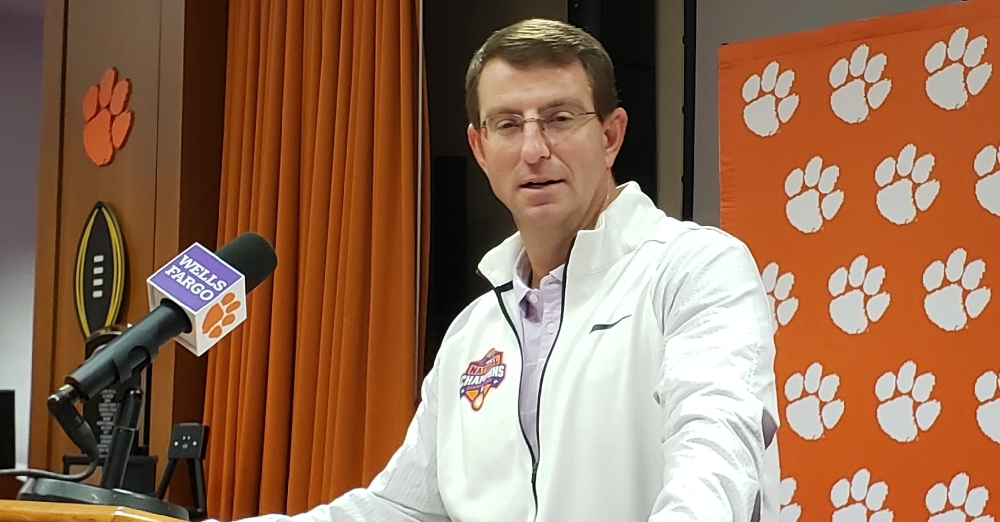 Swinney defended his team's schedule during his Tuesday press conference

CLEMSON – Clemson’s football schedule is taking a beating from the national media ahead of this week’s initial release of the College Football Playoff rankings and head coach Dabo Swinney came to the ACC’s defense in a big way Tuesday. After all, why doesn’t Alabama get dinged for all of the bad SEC teams?

The national narrative is that Clemson’s schedule is weak because of the Atlantic Coast Conference – there are no dominant teams and just one is ranked (Wake Forest) this week. Swinney was asked about that during his Tuesday press conference and he hit back at those who scoff at the Tigers’ schedule.

“As I said the other day that rhetoric is the same. We played the same schedule since I’ve been a head coach here,” Swinney said. “We play eight conference games. We play two SEC teams, unless it’s a Notre Dame year. We play one other division one, and we play an FCS from the state. That’s what we’ve done. And every year - we don’t play anybody. In the beginning of my career, it was well, there will never be an ACC team in the playoff because they don’t play anybody. Well then we become a dominant team in the postseason and now we only win because we don’t play anybody. It used to be where we couldn’t match up in the postseason. I just laugh. I mean it just it’s just the same old spin.”

Swinney then used the example of Alabama, which rolled through a weaker SEC last season but was given the benefit of the doubt before getting blown out by Clemson.

“Who has beat Alabama in the SEC? Who? How many games have they lost in the last five years in their conference? You gotta really think about that, don’t you? It ain't many, but yet we’ve had a great run in our conference but it’s only because there’s nobody else any good,” Swinney said. “It’s just the rhetoric and it’s the same. And it just doesn’t matter. We play our schedule. I can’t control what other people think or say, but I’ll tell you this - our league has had the most bowl teams the last three years of any conference in college football. We’ve done really really, really well, and nobody wants to talk about that, You can go back and find plenty of video footage last year, of all the people who said Clemson can’t win. They didn’t play anybody. They’ve only played one team and it was Notre Dame and they’re no good and you know all this and that. And then we win and then it’s well, they were tired. You know, distracted. I mean it’s just laughable. It’s fun though. I think it’s great. I think it creates a lot of excitement and a lot of fun stuff to write about and a lot of good.”

For now, the Tigers will stay locked on to the task at hand.

“So, I think it’s great. I think it’s a lot of fun. But for us, we just stay locked in on what we control, and we’re excited to play anybody that we play, and we just focus on that week and if we are fortunate enough to get the postseason,” Swinney said. “We try to have the best postseason we can, and we’ve had a lot of good moments against great programs great teams, and we haven’t won them all, but we we’ve been pretty good. We just worry about our team. We don’t run around and hold the banner. We just worry about our team, just worry about Clemson. I think we’ve been able to represent Clemson pretty good.”