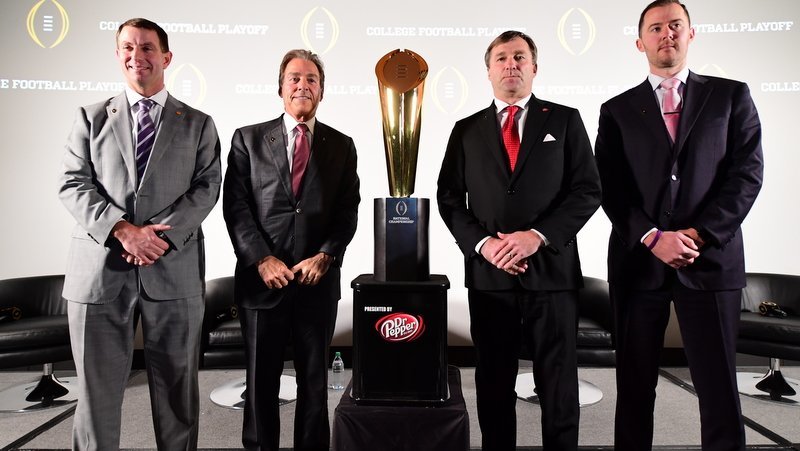 While Smart fielded the majority of the questions, Saban and Swinney each got their time in front of the cameras. The two teams play in the Allstate Sugar Bowl in New Orleans on January 1st.

Saban started off by being complimentary of Swinney and the Clemson program.

“We feel very fortunate. This is our fourth straight time of being involved in this game. Obviously some great competition and some great football games,” Saban said. “Clemson, deservedly the No. 1 team in the nation. Very explosive offense. Dabo does a great job. They have a very good defense. Their front seven is probably second to none in college football.

“This is our third year in a row of getting to play in this. We're excited about having the opportunity.”

Swinney cut his eyes at Saban during his opening statement. 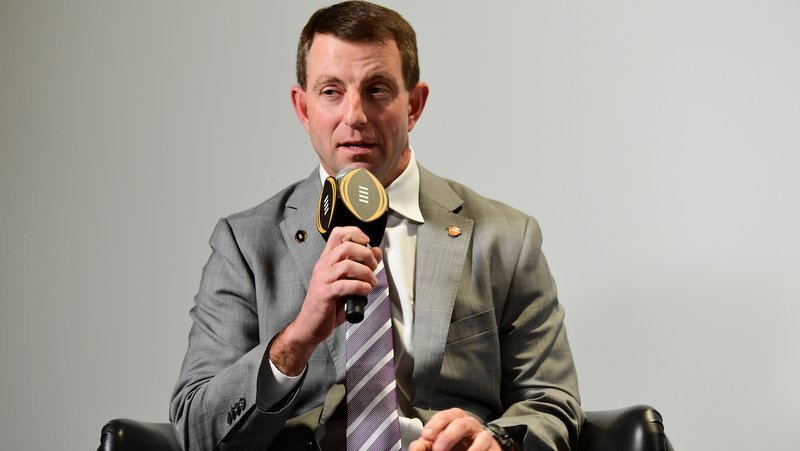 “Obviously, I can't seem to get away from these guys, as hard as I try (smiling),” Swinney said. “Man, it's not an easy task to play Alabama. I don't care where you put them, they've had the best team for a long time. We know it's been two great games. I don't have any doubt this one will be another great matchup. But got a lot of respect for what they do there, obviously Coach Saban, the consistency they've had.

“But we look forward to it. It's going to be a great opportunity to prepare. Should be a great game.”

Swinney was then asked why he voted for Ohio St. at number four instead of Alabama.

“Three in the morning on a bus ride home from Charlotte, a moment of insanity, complete insanity (smiling),” Swinney said, once again eyeing Saban. “No, just coming home. Literally, it was 3:00 in the morning. Man, I got to do this poll. Looking at it, you know, they won 11 games. Alabama won 11 games. They won the Big Ten championship. Obviously, the committee has a lot of things to look at, a lot of data. They're going to pick the four best teams however they see it. At that moment, that's the way I voted. They're all great teams, man.”

Saban quickly countered with, “He was just respecting his alma mater, that's all (smiling).”

Swinney then said, “I'm trying to get rid of him, but I can't shake him (laughter).”

The teams have almost a month to prepare, and Swinney said he doesn’t see one side of the ball having an advantage over the other.

“From an offense, defense, kicking game standpoint, I don't really think anybody has an advantage because we all got the same amount of time. I think the advantage comes for how you use that time. I think everybody uses that time differently,” Swinney said. “For us, I mean, we work a lot on ourselves. It's a lot of Clemson work. Obviously, it's a lot of prep work for the team we're getting ready to play. It's also a lot of work on our future team.

“We've got a formula that we believe in. I think everybody is unique and different in how they use that time. I think that is maybe an advantage or not an advantage, depending on what your philosophy is there. As far as schematically, I think everybody has the same amount of time to study, prepare, all that. I don't really see a big advantage there.”

The four head coaches pose in front of the trophy

Swinney and the coaches were then asked if they would be in favor of expanding the playoff from the current four-team format.

“Oh, man, I like the system that we have, to be honest with you. I think we've been in a Playoff mode every week, literally, for about four, five weeks now,” Swinney said. “Every week has been a Playoff mentality for us. You lose, you're probably out. It's been all you got every single week. Every game is the biggest game of the year. I think the season is long. It's very long. Yes, we could shorten this time. There is recruiting. We have early signing dates now. There are finals. Our guys, they actually go to class. They got tests all next week. It's going to be a real dancing act next week to try to practice and recruit and finals. There's a big challenge there.

“I think you'd probably have to do away with championship games or something like that. I mean, I'm not opposed to it. I like what we got. I think we pretty much have gotten it right. I think it gives an opportunity to a lot of teams to be able to go and play in a bowl game, end their season with a win. I don't think there's anything wrong with that. To be able to go, take your team, prepare them, get better, finish your season with a win. Most of these other sports, there's only one team that finishes with a win. I think that's unique to our sport. But I do understand the other side of it, as well. I think they'd probably have to look at some type of bye concept or something for a couple teams, obviously, shorten the time, do away with the championship games. I don't know what the exact formula is. I don't spend a lot of time thinking about it. I kind of like what we have.”

Swinney then went on to say that the current format is what separates college football from other sports.

“You know what, there's nothing wrong with going 9-3, 8-4. Maybe that's the best you were that year. Now you have a chance to go play a good bowl game somewhere, grow your team, get better, develop some guys for the spring. That's kind of what I grew up in. I'm kind of traditional in that.”