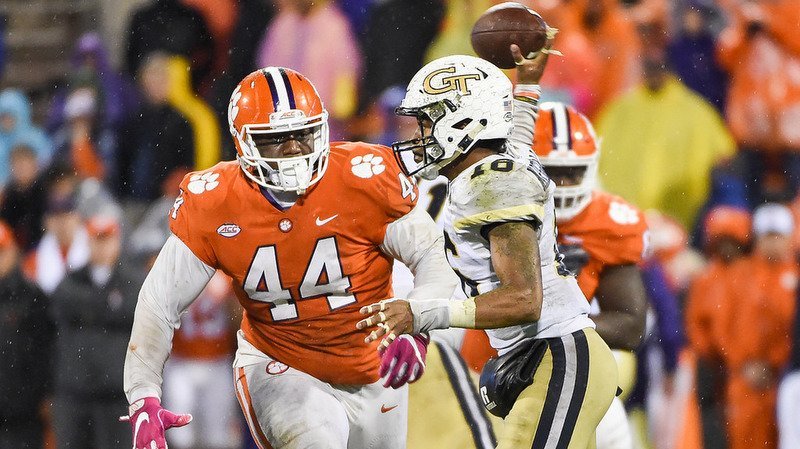 Pinckney looks to make major strides over the summer

CLEMSON - Nyles Pinckney, a redshirt sophomore from Beaufort, knows the competition to get that starting spot on defense is as high as ever.

Pinckney is competing with Christian Wilkins, Albert Huggins, and Dexter Lawrence for snaps on the Tigers’ talented defensive line.

“It’s competitive, we don’t say it to each other a lot but we like to compete,” Pinckney said. “Coach (Todd) Bates says just work to get better every day, but he says it’s a battle, all in all, maybe not to get a three spot but to try and be a starter. Even Christian (Wilkins) says it himself, he wants us to try and be him now.”

With Wilkins, the news of his return to Clemson brought similar emotions to Pinckney as it did the rest of Clemson - excited.

“Having a leader like that coming back, especially with doing what he’s done as a freshman,” he said. “He wanted to come back and help us out, it’s really to help the team, and that really helps us. It shows us what it looks like to be a four-year Clemson tiger and that kind of leadership.”

Pinckney also seemed to have been preparing for Clemson’s annual spring game held last month. Although essentially just a scrimmage, Pinckney knew he still had a job to do.

The blooming freshmen are doing better than ever under Coach Bates' watch.

“From growth-wise, I feel like they are coming in and running around like chickens with their heads cut off,” Pinckney said. “But as time goes on Coach Bates will come in, and he talks to them, he nurtures them, he gets to know them. They are really making big improvements with their hands, being more confident, I feel like they made a big step.”

Pinckney drew rave reviews during the spring, but he just wants to stay out of the spotlight and work hard.

“I don’t really look at all that. This is the first time I’m actually hearing about it myself. I just try to keep my head down and work because that’s all Christian, and Coach Bates, and everybody tells us to do,” Pinckney said.

Nonetheless, Pinckney knows there are many strides to be made before next season.

“Mostly I’m looking to improve confidence-wise, technique, a few things here and there. But also, just to take in everything everyone is telling me, coach wise, players talking to me, just trying to help me get better,” Pinckney said.