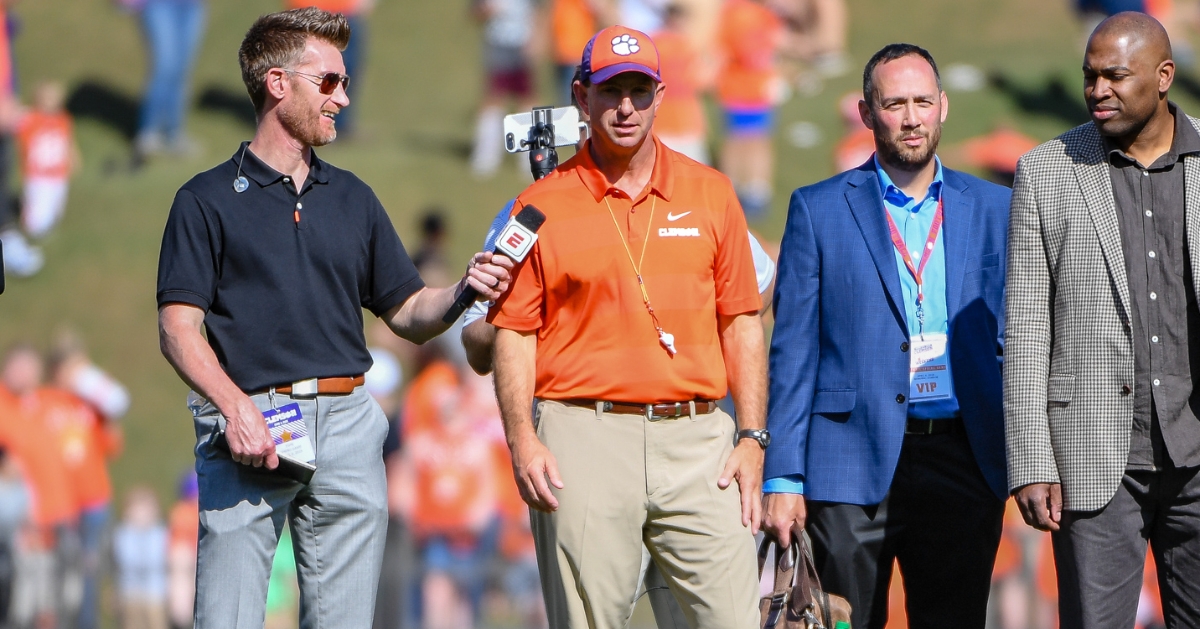 CLEMSON – We have spring game rosters. Why? Because no virus is going to keep our spirits down for long.

Yes, Saturday was the scheduled date for the annual Orange and White spring game. The weather forecast? Sunny with a high of 74 degrees, perfect weather for the orange-clad faithful to break out the tailgating gear and enjoy a day in the sun. Social distancing rules say that can’t happen, but it’s our hope that you still take the time to get out and enjoy grilling out or at least have some semblance of a tailgate.

If your neighbors give you weird looks, just remember they can’t get close enough to do any damage. Just wave and go about your day. Yes, we are all missing Clemson sports and the cancellation of the spring game hurts.

One of the highlights of the spring game is the roster reveal – the Clemson coaches get together on Thursday night and pick their head coaches and draft their rosters. In that spirit, Nikki Hood is drafting one team and David Hood is drafting the other team.

We have a couple of player rules – no one is injured. We wanted the full roster so everybody had a chance to “play” at least once in front of the fans. Also, perhaps the two most important players on the roster are quarterback Trevor Lawrence and running back Travis Etienne. Because there are just three scholarship quarterbacks on the roster and a bevy of running backs, each one of those two players will play two series for each squad before heading to the bench.

That gives Taisun Phommachanh and DJ Uiagalelei the chance to see the majority of the field time, with walk-on Patrick McClure taking reps for both squads. We then flipped a coin to start the draft and David received the first pick. We decided we would do the draft by position group, and that means Nikki would then get the first crack at the running backs.

Here are David Hood’s notes from the draft:

*I won the toss and took quarterback Taisun Phommachanh.

*Nikki takes Lyn-J Dixon as the first running back off the board.

*I had the first pick of the receivers and took Ross, while Nikki took Rodgers. I already have my 9-man with Ross, so I went the other side of the field and took Ladson. Nikki grimaced – she really wanted Ladson. I then took Brannon Spector for my slot guy while Nikki grabbed EJ Williams. Her reasoning on Williams over Ngata? She is interested to see what he can in a starting role and she needs speed. That left me with Ngata, and I think I am looking pretty good. I also grabbed Will Swinney because I need a holder. We filled out the rest of the receivers, and one of them (Hampton Earle) has to play both plays because we have 13 receivers.

*Nikki took Galloway as the first tight end off the board and I grabbed Davis Allen. She then grabbed Luke Price and I took Jaelyn Lay. She took Sage Ennis and I have JC Chalk. Fairly even if you ask me.

*The offensive line was difficult – we had to make sure we each had tackles and guards and centers. I took Carman and she grabbed McFadden, while I took Paul Tchio and she had Mitchell Mayes. That is based off of what we saw early in camp when the two rookies were manning tackle spots. I took Stewart at center and she took Rayburn, and we agreed to split Trotter as needed. That left a bunch of guards and multiple position guys.

And we get it..guys from both of our teams would have to flip jerseys and play for the other team at some point, just because of the numbers.

*At defensive tackle, Nikki had the first pick and took Tyler Davis. We agreed that there are a few veterans we wanted to nab before taking a freshman, which means I took Pinckney and she took Jordan Williams. That left an opening for me to grab Bryan Bresee, and after she took Capehart I got a big thumbs down from her by taking Jefferies. We filled it out from there.

*I had the first defensive end pick and went with XT. Why? I am a big believer that this is his year. Nikki loves Justin Foster, which led me to KJ Henry and her to Myles Murphy (even though we fought over that one).

*Nikki, of course, took Skalski as the first linebacker off the board, I grabbed Spector and then it was a free-for-all from there while we tried to make sure we had a nice mix of outside and inside guys.

*Kendrick was the first corner, while Nikki took Sheridan Jones. That left me with Booth and it went from there. At safety, she took Lannden Zanders with the first pick while I took Nolan Turner and still wound up with Charleston and Phillips. I like my crew on the back end.

*We agreed that we would split the specialists, and as for the coaches, Brent Venables will coach both defenses and Tony Elliott has both offenses. From there, we dipped down into he support staff to make sure we had a nice mix each of offensive and defensive coaches, including trying to make sure we had a coach for each group.