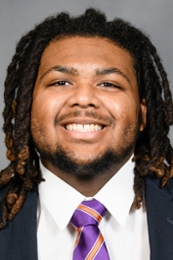 Offensive Line
B I O
Overview: Will play in the Under Armour All-America Game on Jan. 2, 2020 … participated in The Opening in Frisco, Texas in the summer of 2019 … one of six offensive linemen in this Clemson class, and is ranked as the second-best offensive tackle in the nation by ESPN.com … could contribute to 2020 Clemson offensive line that graduates four starters from its 2019 unit … rated as a five-star by many services.


In High School: Played for Ben Kolstad at Leesville Road High in Raleigh, N.C. and at Sanderson High … four-year starter as a lineman … played defensive tackle as a freshman and offensive tackle his final three seasons … all-conference selection as a sophomore, junior and senior … selected to the North Carolina/South Carolina Shrine Bowl on Dec. 21, … two-time captain of his Leesville Road team … helped Leesville Road to the state championship game in 2019.


Personal: Committed to Clemson on March 11, 2019 … recruited to Clemson by Robbie Caldwell … expected to enroll at Clemson in January 2020.