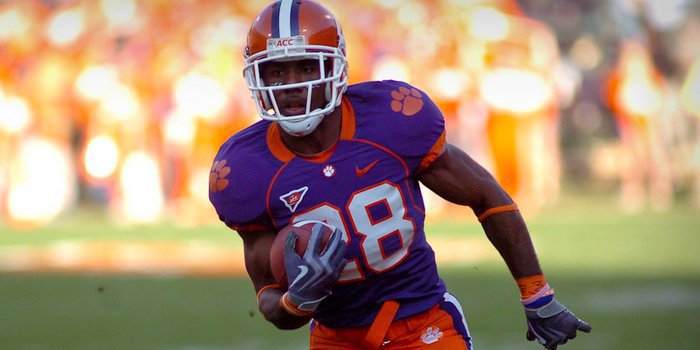 Spiller says he thinks Feaster will wear the number with pride

Freshman running back Tavien Feaster will wear number 28 this season, with the blessing of current New Orleans Saints running back C.J. Spiller.

But Spiller says wearing the number comes with an obligation.

Feaster is a 5-star 2016 running back commit out of Spartanburg (SC) that should see playing time this season. Feaster wore the number as a Viking, but Spiller’s jersey was retired during a ceremony in November of 2010. Many wondered if Spiller would allow the talented prospect to don his number, and it was confirmed when the school released the official roster late last week.

Spiller says head coach Dabo Swinney approached him about the possibility of Feaster wearing the number, but he already had an idea a request would be forthcoming.

“Coach Swinney came to me about it several months ago. I knew they were going to because when he was being recruited, I was following him a little bit and I knew No. 28 was already his number, so I already was preparing in the back of my mind for the conversation about him possibly having the opportunity to wear the number,” Spiller told TigerNet Monday. “I just told Coach Swinney to let me get to know the kid and let me see what he's all about because it's one thing for a coach to tell me how he is, but it's totally different for me to get my own perspective of how the kid is and I'd make a decision from there.”

Spiller said he got to know Feaster through telephone conversations. 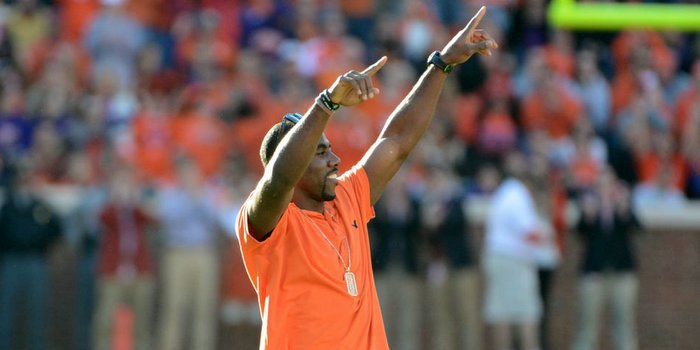 Spiller says he thinks Feaster will wear the number with pride "

“I had a chance to have some conversations with him, but I didn't get a chance to meet him face-to-face like I wanted just because I had so much going on, he said. “Through my conversations, he sounded like a real grounded kid, humble kid, eager to learn from Wayne (Gallman) and to be that next great back that Clemson produced.”

Following the jersey’s retirement in 2010, Spiller wondered if he would once again see it take the field in Death Valley.

“I'm excited about it. It was a very tough decision because I never thought in my wildest dreams that the No. 28 would be worn again unless my son or one of my nephews went to Clemson, if he chose to wear that number,” he said. “I thought he would be the next to wear that number, but God works in mysterious ways. I prayed about the decision and thought about it long and hard. I went back and forth on it and weighed yes and no because the number is not just about football.”

Although Spiller has agreed to let Feaster wear the number, he wanted to let both Feaster and Swinney know that the number comes with an obligation and that he reserves the right to put it “back in the closet” if certain expectations aren’t met.

Clemson has been through a similar situation recently – Steve Fuller allowed quarterback Deshaun Watson to wear his number four jersey. Watson wears a Steve Fuller patch on both his game and practice jerseys, and Spiller said he expects Feaster will do something similar.

“To my knowledge, it will be the same. It will be the same thing they did with Deshaun. The patch will be there on the practice jersey and the game jersey,” Spiller said. “There won't be anything different. It's been 10 years since I committed to Clemson. Who would've thought that it's been a whole decade since I made my decision. I thought, you know what, it's a big year and this team has a lot of excitement and then you've got a kid that's the second 5-star running back to come to Clemson since I did it. I took all of that stuff into consideration and told him to go have a ball with it. It will have the patch and it will be exciting.”

Spiller said allowing Feaster to wear his number came down to one thing – his love for his school. 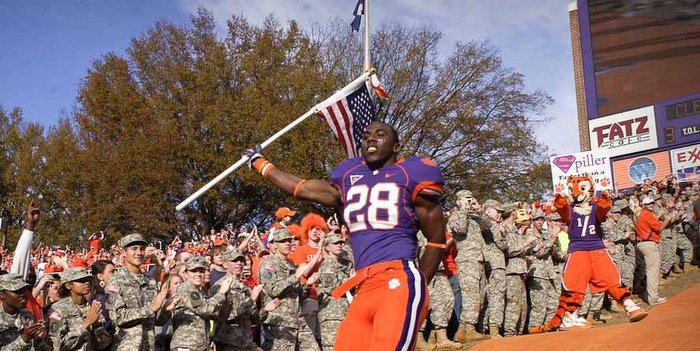 “It's truly an honor to see someone wearing No. 28. It's just my love for Clemson,” he said. “I'm not a selfish guy and I never was. Some people might ask why I'm letting him wear it, but it's just the love that I have for my university and for that football team. I'm looking forward to it.”

Spiller said he hopes Feaster wears the number proudly during what could be a special season, and he thinks the Tigers can win a championship in 2016.

“I really do. You never know until these guys start, but Coach Swinney says these preseason rankings mean nothing and the only time they matter is when you start getting into October and November,” he said. “I really think that by them going to the National Championship last year and getting a taste and seeing what it takes to win it, they've got that hunger and that desire to get back to that stage and finish it. Talking to Wayne and Coach, the team is focused.

“They're a young team and just like every other team in the country, they'll have questions about certain positions, but that's what you have fall practice for and all of that stuff. I know they'll be ready to go on September 3rd when they play Auburn. I know they'll have the best guys ready to go out there and give them a chance to win. I'm excited about them. It's a tough schedule and there are always tough teams, but these guys have what it takes to get it done this year - get back to where they were last year but this time finish it off.”