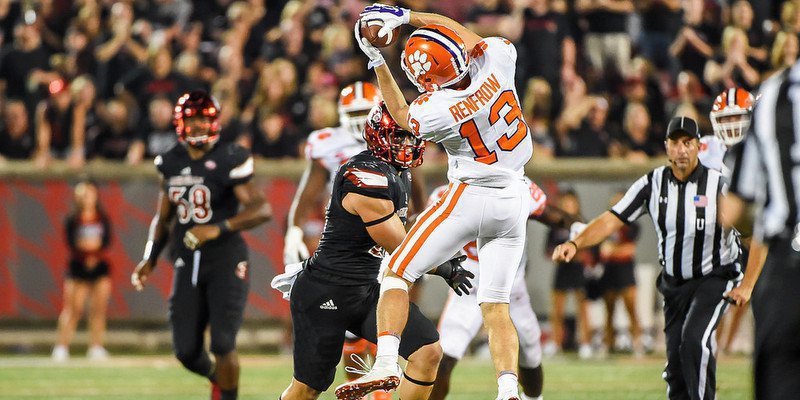 The Silent Assassin in his natural state, surrounded by the enemy

CLEMSON – Two hours before kickoff at Papa John’s Cardinal Stadium in Louisville two weeks ago, wide receiver Hunter Renfrow walked out onto the playing surface and looked for Drew Swinney, the middle son of head coach Dabo Swinney. Lost in his own thoughts, he didn’t hear the jeers from the Louisville faithful as he went through his pregame routine.

It doesn’t matter what was said that night. Not to Renfrow. He knows that people still doubt him, doubt his abilities, and he makes a mental note of it. He doesn’t talk about it on social media, he doesn’t get tattoos celebrating everything he’s overcome, and he doesn’t brag about his success.

He’s the quiet assassin on the Clemson football team. You might overlook him. You might not see him coming. But when the din of battle is over, especially if you’re Alabama, you realize one of the smallest guys on the field got you.

Renfrow continued to warm up with Swinney, part of his pregame routine, and once again ignored the members of the Louisville student section who chanted “overrated” as he jogged off the field.

“I honestly didn’t hear them,” he said.

He came back out in his pads and helmet, and the Louisville students once again took up the overrated chant. The only response they got was from another wide receiver, who simply pointed to his ring finger (mean he wears a championship ring), shrugged his shoulders and turned around. 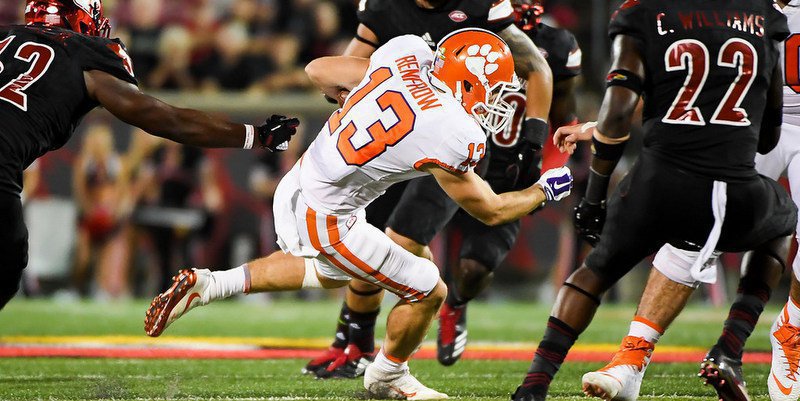 The Silent Assassin in his natural state, surrounded by the enemy "

The group continued to bait Renfrow, who went about his business with an air of calmness because he knows he doesn’t have to win a game by himself.

“You want to be the best at what you do. That is part of being a football player, but it's also anything you do in life,” he said. “You strive to do your best. People can say what they want to. It doesn't affect me. But when it comes down to it, our job is to win games. If I fumble five times and we still win the game then the mission was accomplished and we got the job done. That’s all that matters to me.”

The only tattoos Renfrow has are the badges of honor he sports after a game. He walked out of the Clemson locker with huge strawberries on his legs, a grisly reminder that field turf isn’t always a player’s best friend.

“I prefer grass, that’s for sure,” he said. “But that’s part of the game. I should have worn leggings, but after you get out there, you don’t care.”

Renfrow caught four passes for 71 yards against the Cardinals and hopes to continue his early-season success this Saturday at Virginia Tech. He has 21 receptions (tops on the team) for 202 yards (second to Ray-Ray McCloud’s 218).

He is missing a touchdown, however, and he hopes he can get back in the end zone in Blacksburg.

“It's odd. I think I have 11 touchdowns, and 10 of them have come on the road,” Renfrow said. “Maybe it's away stadiums? I don't know what it is. Maybe I am more dialed in? I've always thought that was interesting.”

As he walked out of the stadium in Louisville, there were no Louisville students there to call him names or throw out criticisms. He wouldn’t have cared if they had been there. But he doesn’t like it when former players or college football analysts question his abilities.

When he takes the field in Blacksburg Saturday night, he will find Drew and the two will start up their pregame routine, and Renfrow likely won’t notice if the catcalls start early. But like everything he does, there is a reason he warms up with his coach’s son, who also happens to be his best friend’s (Will Swinney) little brother.

“So, last year it was Andy Teasdall. But this year it's Drew. We steal a little warm-up before the game, and when we win like we did at Louisville, then it's something I have to do moving forward,” he said. “It just reminds me of the magnitude of the game, being in the backyard with friends. You go back to your childhood and you're throwing the ball with your friends. On Friday nights when my dad was coaching and I would go and throw on the sideline. It takes you back to there and takes the seriousness out of the game. It reminds you that it's just a game and you don't have to take it that seriously.”

Renfrow doesn’t talk much during the game, and he wouldn’t dare respond to opposing fans. He doesn’t like to talk smack to his teammates – even though he and linebacker Dorian O’Daniel have their battles – and instead, saves it for his head coach.

When he’s not playing football, Renfrow can be found at Swinney’s house.

“I feel like I have a good relationship with all of them. I have fun going over to their place and playing games and hanging out with them,” he said. “The type of people they are, they really are special people. It's just the type of family they are - they are so welcoming and they are the kind of people I want to be associated with.”

It doesn’t stop him from talking a little smack, however.

“We played some basketball back in the spring,” Renfrow said. “It was me, Clay and my brother Cole against Coach Swinney, Will and Drew and we beat them the best two out of three. I haven't let them live that down.”