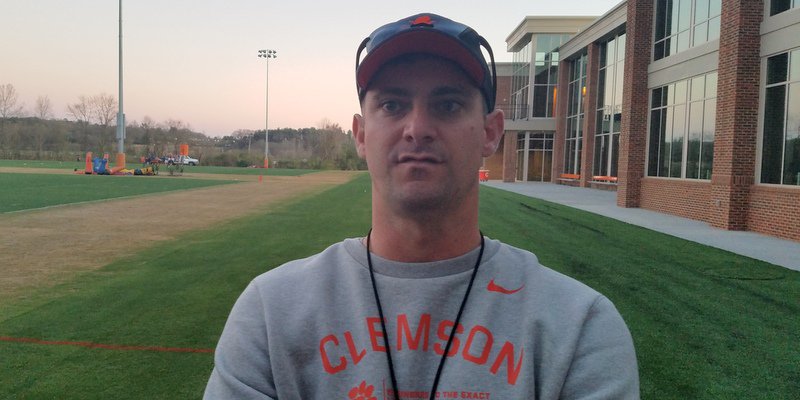 Jeff Scott talks to the media after Friday's practice

CLEMSON – Best is the standard for Clemson’s football team, but Wednesday’s situational scrimmage didn’t live up to that standard or the expectations of offensive coordinator Jeff Scott.

However, through six practices, that wasn’t unexpected.

The Tigers held a mini-scrimmage Wednesday afternoon, and Scott said that for the offense, it was well below average.

“Just okay. Really, where we are offensively, we've got 45 guys getting reps in three groups - mixing up the quarterbacks, mixing up the wideouts, mixing up offensive linemen,” Scott said Friday afternoon. “The scrimmage was not as efficient as we need to be and as we want to be. There was always somebody making a mistake. We had a nice throw and touchdown catch, but we give a sack. We have really nice protection and we drop a ball, then we have really nice protection and we miss a pass. It's just getting everybody on the same page. Part of that is you're repping a lot of guys and throwing them out there.

“Very average to below average. It was really just a half, situational scrimmage. It wasn't a true scrimmage. We've got our first real scrimmage Wednesday of next week. We may have a 25-yard play but we're bringing the ball back to where we started, so it's a little bit tough. We're really just trying to get guys out there and get live work, but what you look for as a coach is the progress you have from the mistakes you had Wednesday, guys come in Wednesday and Thursday to watch the video and correct it and how do we respond today. That's the thing I'm most pleased with is the way we responded today and correcting a lot of the mistakes we had from the scrimmage on Wednesday.”

There are high expectations for the defending National Champions, but Scott said the coaches want to put the players under the most stress possible in order to see how they’ll respond.

“You go into it with high expectations, but if you've been around for a while you kind of know. As coaches we put them in some tough positions on purpose,” Scott said. “We wanted to see how they responded and how they responded to the failure. If they have a bad play, what do they do the next three plays? Right now, you don't know what to expect until you get out there. That's part of the reason it's a lot of fun coming out to practice. Overall, we're more pleased with where we thought we would be after six practices. Still a long way to go, but we've seen enough bright flashes out of all of those guys to have some good confidence to know that we're going in the right direction.”

On the quarterback competition

“Today was a really good day. I think we've had five installs and six practices. We're going pretty heavy and we've done that on purpose because we've wanted to force feed those guys a lot of information and see who can process it the quickest. Different guys process at different levels. Today was really the first day that it really started catching on for the guys - making decisions, knowing where to go with the ball. It was by far our best day in six practices and still a long way to go. There's really not a lot of separation. We're seeing positives and negatives. There's a lot of stuff to coach and a lot of stuff to correct, but at the same time there are a lot of positive signs. It's an exciting time for all of our coaches. It's fun going out there with Deshaun (Watson) because you know what you're going to get, but it's fun watching these guys improve every day. Today was our best day we've had so far.”

On the young receivers

“A lot better today than in the scrimmage and same deal. Quarterback is huge position and a huge priority so it gets a lot of attention, but we've got a lot of competition at the wide receiver position moving guys around. Cornell Powell has been a guy who has really taken that next step - very strong. You've seen the progress that you'd have hoped coming from the fall to the spring. I think he's got a very high ceiling.

“T.J. Chase doesn't get talked a lot about. He redshirted last year and part of the reason he redshirted is because when he got here, he was 165 and now he weighs 193. He made a lot of plays. T.J. got a lot of reps with the second group. Today he looked like he belonged with that group, so that's really good. Diondre Overton has had moments and flashes. Today was by far his best day. It's a little bit tougher for him because he's 6-5 and he's big target. Very competitive in the man-to-man matchups and he's got to continue to work on his releases. I was really proud of how those three guys competed today.”

How has Trevion Thompson responded from the injury?

“Good. He hasn't backed down at all. I had some questions in my mind of how he would attack the ball and if he would try to catch the ball with his body and all of that. He's competed. Trevion is a guy that's been around for a while and can move around. He's playing both the 5-man and the 9-man. He played a lot of 9-man today. We're trying to use time this spring to cross-train those guys, but I've been very pleased. He hasn't shown any negative things out of that wrist.”

What have you see from Ray-Ray McCloud this spring?

“Ray-Ray, before today, he led the receivers with 30 catches and two drops. He's competing at a very high level. That's another position where we need a guy to step up after losing a guy like Artavis Scott with a ton of production and had been around for three years. Those are huge shoes to fill, and Ray-Ray is in the top-three guys this spring of guys out there consistently making plays. Really, it comes from practicing at a high level.

“There's a difference between being a backup and being a starter. Being a backup, you can go in there for two or three plays and catch a nice ball and come over to the sideline and catch your breath. When you're the starter, you may be out there eight or nine plays. The stamina of being able to be on an eight-play drive and being able to win on a man-to-man deep field or man-to-man slant route when you're tired, I think that's where Ray-Ray and Deon (Cain) have really taken that next step this springs, which is what they needed to do. I'm very pleased with Ray-Ray and Deon.”

What have you seen out of the tight end group

“Really pleased with Milan Richard. Kind of what we were talking about with Kelly Bryant taking that next step. I think when a guy like Jordan Leggett leaves the room, it gives another guy an opportunity to really step up. Milan has by far had his best few weeks. He's worked extremely hard in the off-season. This is a big time for him to take that next step. He's definitely been one of the bright spots in that group.”