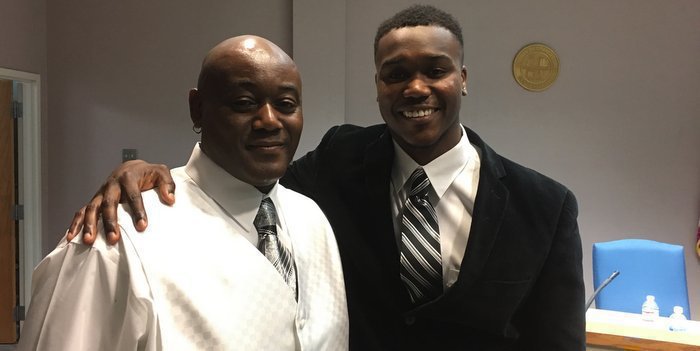 Johnson points into the crowd during his speech

Jadar Johnson stepped to the podium during Clemson’s National Championship celebration, and he didn’t need to look out in the throng of 70,000 fans to find his father. He didn’t have to, because he knew Harvey Johnson was out, supporting his son.

Johnson thanked the fans and Clemson head coach Dabo Swinney and then fought back tears as he thought about his family. Especially his dad.

“This right here is real big to me. I just want to take the time to single this person out, because, on my journey here, it’s been kind of hard. And so I just want to give a shout out to my dad — that’s really like my best friend,” Johnson said as the crowd stood to its feet. “My dad growing up, he always wanted to be a D-I football player, but it didn’t work out for him. I grew up with the same dream, and he made sure that I had everything that I needed to follow through with that dream.

“He worked long nights, I mean long nights; some nights I wouldn’t even see him because he was out working so hard. And him having to work that hard just to put me in camps, so I could perfect my craft and be seen by schools; I just want him to know that it didn’t go unnoticed."

Like many teenagers, Johnson didn’t always show how appreciative he was of what his dad was doing. 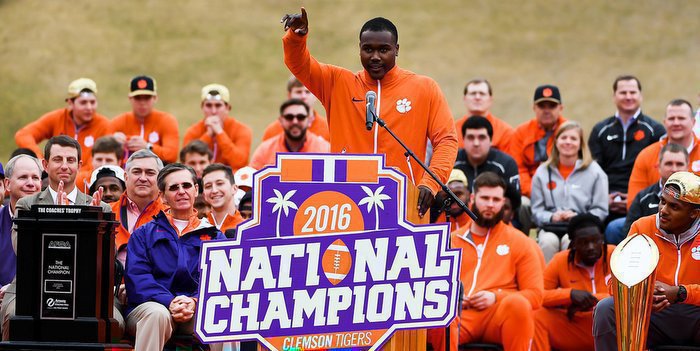 Johnson points into the crowd during his speech "

Harvey Johnson, a truck driver for Food Lion, spent many long and lonely nights on the road so Jadar could attend football camps, but he wants everyone to know that the sacrifice was worth it. That he would do it again.

"It feels amazing. That speech that he gave at the National Championship celebration, I don't like to cry in public, but it made me cry,” Harvey said a few weeks ago. “It made me very emotional, just for him to remember and just to think about the things that we did, as a family the sacrifices that we made. It is an awesome journey, though, and if I had to make those sacrifices again, I would make those sacrifices and more."

Jadar will likely hear his name called at some point in the NFL Draft later this month, and Harvey says it doesn’t matter in what round his son is picked, he knows he will be a success.

"The journey, as parents, you want the best for your kids. The journey has been tough, but it has been real rewarding at the same time,” Harvey said. “He may not go in the early rounds, but I know, just like at Clemson, once he gets on the field he will get a second contract. He may not get drafted early, but he will get a second contract because he loves football, he studies football, he lives football. He has a lot to improve on, and the good thing about that is that he knows he has a lot to improve on. Now it's just wait and see, but the journey to get to this point--it's been up, it's been down."

Draft night will be emotional in many ways for the elder Johnson.

Jadar admitted that he got homesick during his first season in Clemson, and wanted to come home and perhaps play at S.C. State. Tabitha Johnson, his mother, wouldn’t allow it.

"Actually, I was so confused when all of that was happening, but my wife she stood tough. She was like, 'Jadar's not coming back home,” Harvey said. “We don't have money to pay for college. He's going to college free, and he's going stay at Clemson, and he's going to finish school.' It was more her because I was getting ready to say, 'Well, if he wants to do something different?' But listening to her, sometimes you gotta listen to your spouse, listening to her I was like, you're right, you're right.

“We don't have money to pay for college, so he's going to have to tough it out. And now I don't think I would have let him come home, but I was being more sympathetic than she was. She went to see him that next day, and he thought she was coming to pick him up. She was like, 'No, I just came to see you. You're not going back home. You're not going home.' She left me at home, and I think it was a good thing that she left me at home."

Jadar stayed, had the perfect ending to his collegiate career and is now looking forward to playing in the NFL. And, no matter where he plays, he knows his dad will there.

A dad who appreciates just how far his son has come.

“When I hear him speak now, sometimes I don't believe that he's my son. There were times when he wouldn't talk,” Harvey said. “He was just so shy. He was so shy that if you asked him a question all you got was that direct answer. If it was a yes or no question--all you got was a yes or a no. Now he elaborates. When I hear him speak now I'm like, 'God, is that Jadar?' He's come a long way, but if you make the sacrifices and you push your kids, you'll get results."