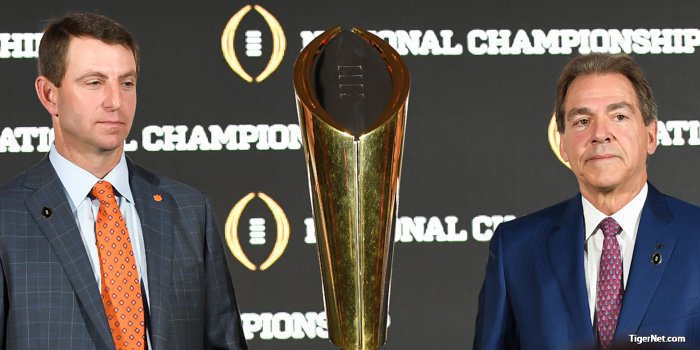 Swinney and Saban pose with the trophy Sunday morning

Saban even went as far as to say that Clemson is the best team.

Both Saban and Clemson head coach Dabo Swinney met with the media Sunday morning at the Tampa Convention Center, the final media opportunity ahead of Monday’s title game between top-ranked and undefeated Alabama and second-ranked Clemson.

“Well, I think that based on competition, competitors, you want to play -- you should expect to play the best team. If you're going to compete for a championship,” Saban said. “And I think certainly think that Clemson deserves to be here, and I think they're the best team, and I think our team deserves to be here, and they've done a great job all year to beat a lot of good teams to have the opportunity to get here, as well.

“If I were going to pick who the two best teams are, I would say the two best teams are here. And that's the way it should be. That's the way a playoff should be. And I think if you want to be the best, you've got to beat the best. I think that probably goes both ways for both teams. So we're excited about the challenge that we have to play against a great team that has great players, and we know we're going to have to be our best as football players to have a chance to be successful against them.”

Saban said it has been a challenge getting his team ready for Clemson.

“Dabo does a great job. They have a great coaching staff. They've done a great job of recruiting a lot of good players, and they've done a good job of developing those players, and systematically, what they do on offense, defense, and special teams are very, very challenging,” he said. “And I think that we need to be ready for whatever might happen and whatever the situation might be. But I think even without any new wrinkles, it's been a very challenging week for us in terms of our team getting ready for what they do because they do a fantastic job.”

Swinney said he thinks his team is better equipped to handle Alabama this season.

“I really did not like how we finished last year. I appreciate we found a way to win in November, but we were straining to get to the finish line, if you will. We played 10 straight,” Swinney said. “We were a very top-heavy team. We didn't have a very good rotation defensively, seniors and then freshmen. The bye week was better. We were not healthy, either, down the stretch. We had a couple guys that didn't even practice for this game last year, Mackensie (Alexander) and Shaq (Lawson), and both tried to play. Shaq was able to play and played pretty good, and Mackensie didn't make it.

“But we're a healthier team, but more importantly, we've got more functional football players. We're competitively built differently from a depth standpoint than we were last year. I think that's always the position you want to be in as a coach because it just brings a different edge to your meetings, your practice and everything. Last year we didn't quite have that, and this year we do. I like where we are as a team, and hopefully, we can play our best four quarters tomorrow night.”

Swinney then said that he’s thankful to be a part of the championship conversation but isn’t thrilled with the opponent.

“I'm very thankful to be here. I'll just tell you, I'm not real excited about playing Alabama tomorrow night, but I'm very, very thankful to have the opportunity to be here,” Swinney said. “It's one of the things I try to tell our players, in having been a part -- this is my third National Championship experience. We all know how time just -- it's just gone. And I think it's important that you breathe a little bit and that you enjoy it. Don't let the pressure of the moment and the situation cause you to lose any pleasure. Have some pleasure, too.

“So that's what I try to do. I just try to enjoy all of it. I'm thankful to have the opportunity to have a team that is talented and been incredibly committed and has worked really hard to be in this position.”