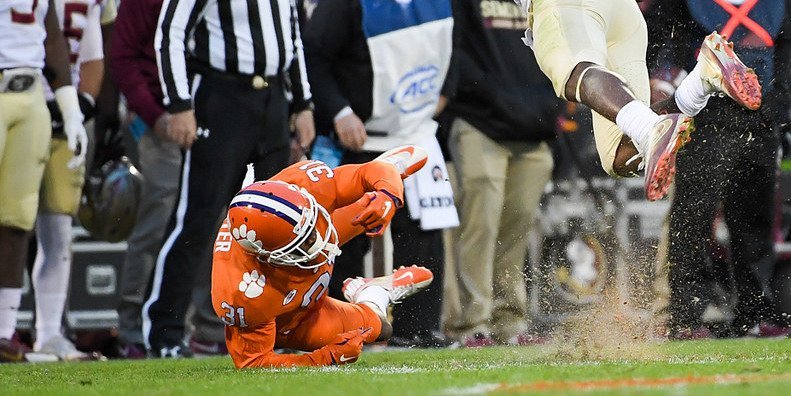 CLEMSON – Ryan Carter doesn’t remember the hit that knocked him out of last week’s 31-14 victory over Florida St. a hit that he calls unnecessary and shouldn’t be a part of the game he loves.

Carter, a redshirt senior defensive back out of Loganville (GA) Grayson, was dropping back to block on a punt return against Florida State during the third quarter of the Tigers’ win Saturday when Florida St. linebacker Emmett Rice lined Carter up in his sights and delivered a vicious helmet-t-helmet blow that knocked Carter unconscious.

Following a video review, Rice was ejected from the game. Rice’s antics didn’t stop with the hit, however; as he was leaving the field he pointed to the Florida St. section and made a sleeping motion with his head and hands, seemingly celebrating his knockout of Carter.

Carter told the media this week that it was a scary situation.

"Honestly, when it first happened I didn't realize I was injured until they were walking me off the field. It was definitely a scary moment because that's never really happened to me before,” Carter said. “I've never been in that type of scenario where I was unconscious and what not but definitely a weird situation. I think I'm okay but I'll be alright.

"It was really foggy, fuzzy at first. When I was in the tent they were explaining what happened and it took me a minute to understand what took place. I think after I got in the locker room and started relaxing it all came back but it happened so fast and didn't realize what happened."

“Yeah I saw the hit, I saw it the next day or day after. It was pretty vicious, he caught me,” Carter said of Rice and the hit. “It all just happened so fast. He definitely caught me and I probably should've had my head on better of a swivel but he caught me at a good time."

Carter said he also saw Rice’s gesture to the crowd and doesn’t think it was necessary to celebrate an illegal and dangerous hit.

"Yeah, they told me about it after, I'm not sure he had to do all that or all that was necessary. It is what it is,” Carter said. "I kind of see both sides but to me, I don't feel like it was really necessary. I don't think I was as close to the play or as close to the ball to make a tackle so I don't feel like he had to go to that extent. He could've hit me in the shoulder or hit me lower and it might've been a better outcome but I guess it is a part of football a little bit but if you go a little too far that's when people start asking questions and raising eyebrows. I thought it was a little bit uncalled for."

"I'm not really sure. I've got to meet with Danny (Poole) and the doctors and see what's best for me but personally I feel okay, but ultimately it's up to them,” he said. “We'll see going forward but I'm not really sure how it'll go with practice and stuff like that yet. I haven't had any lingering symptoms. The worst thing I had was a little slight headache the next day but I haven't had any bad symptoms or anything else. I'm very thankful for that."