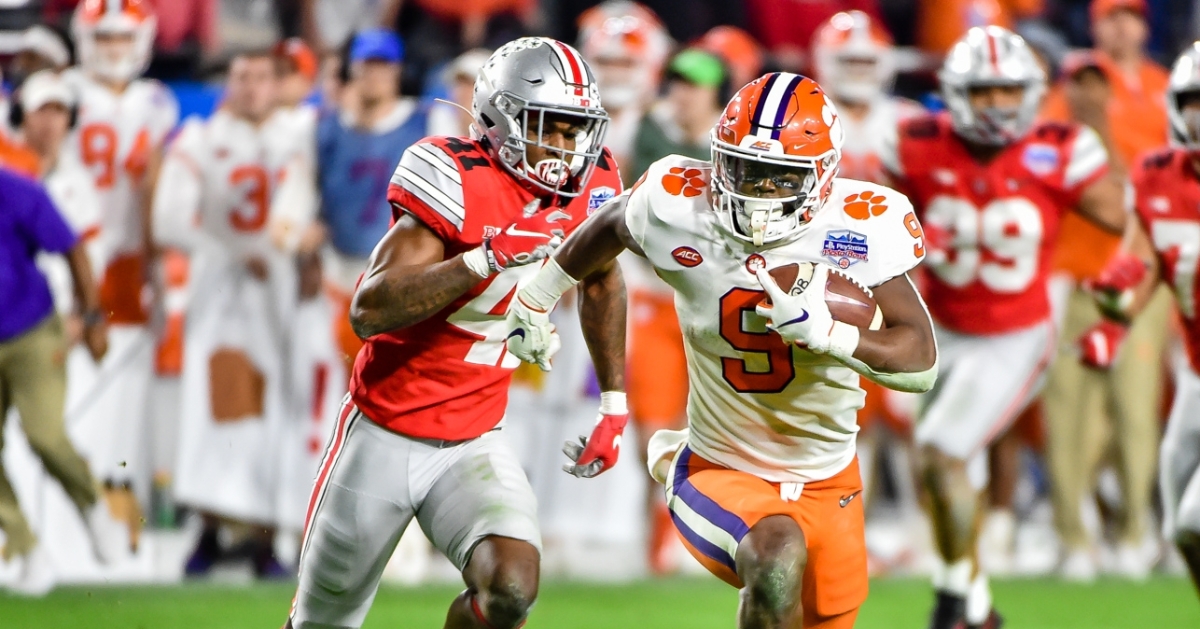 Etienne looks for room against Ohio St. in the Fiesta Bowl

CLEMSON – The last time Travis Etienne took the field in his home state, his Clemson Tigers walked out of the Superdome on the short end of a 24-6 loss to eventual national champion Alabama in the Sugar Bowl. Etienne wasn’t at his best that day, but he’s hopeful for a different outcome this time around.

Etienne and No. 3 Clemson take on No. 1 LSU in the CFP National Championship Game in the Superdome in New Orleans on Jan. 13. Kickoff is set for 8 p.m. on ESPN.

In the 2018 loss to Alabama, Etienne took a blow to the head on an early kickoff return and despite later saying he was healthy the entire game, managed just four carries for 22 yards. He also whiffed on a block for quarterback Kelly Bryant that led to an Alabama interception.

In the locker room after the game, head coach Dabo Swinney reminded Etienne that the National Championship would be played in New Orleans in two years and with it would come a chance for redemption.

"At the time, it felt so far away," Etienne said Monday. "As coach says, the days are long, but the years are short. So, I kind of put it in the back of my head, and boom, it's here now. It's crazy how everything worked out. It's crazy how God puts things in front of you. I saw a picture this summer and set it as my (phone) background. It was me walking off the field, just distraught after that.

“Not really being there for my teammates, not being able to give it my all. So I definitely don’t want to have that feeling again. I’m going to leave everything I have out there on the field for my brothers. Honestly, that game has been in mind for a while. Just as a competitor you never want to have that feeling like you didn't do your best and questioning what you could have done more. I definitely want to avenge that and be able to play the best four quarters of my life and give it all for my brothers."

When Etienne found out the Tigers would take on LSU in his home state, no one on the team was more excited.

"It's going to be crazy, it's going to be an unbelievable experience," Etienne said. "I can't wait to go out there and maximize my opportunity. I just have to realize that I can't let my emotions get the best of me and to stick to the game plan and not do too much.

“It’s definitely a great opportunity to go out there and just kind of redeem myself from my freshman year. It's also a unique opportunity being a kid from Louisiana getting to play in the Superdome against the home-state team. You couldn’t script this up any better."

Etienne hasn’t made a decision on whether he will declare for the NFL Draft after the game – some mock drafts have him going in the first round while others have him as a second-day pick – but for right now he is concentrating on playing the best four quarters of his life.

“It’s a humbling feeling and it’s going to be a great experience,” Etienne said. “I can’t wait to go out there and play the best four quarters of my life. I’m going to try to tackle it with a next-game mindset, but it’s definitely going to be an emotional game. We can’t let emotions get the best of us because emotions won’t win the game for you.”