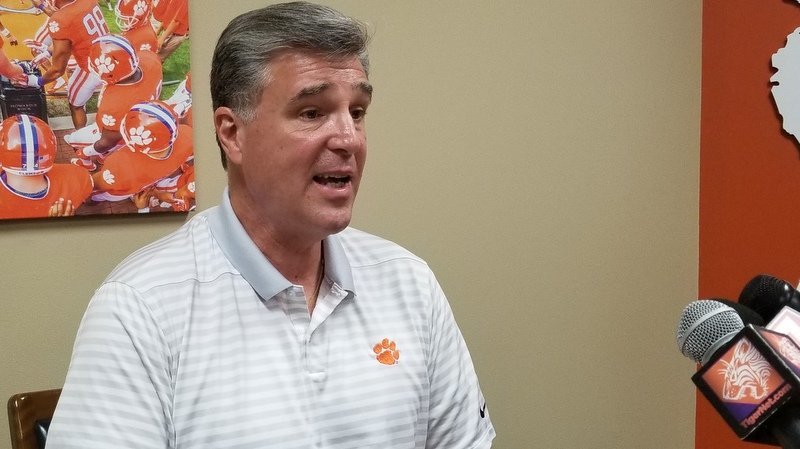 Radakovich says a decision on Steve Smith will be made quickly

CLEMSON – Athletic Director Dan Radakovich sat down with the media following Friday’s Board of Trustees meeting and covered a variety of topics, from the new contract for Dabo Swinney to the comments made by an assistant basketball coach that were brought to light Thursday.

The following is a transcript of that session:

“I'm incredibly happy that we have now created a great commitment from Clemson to Coach Swinney and from Coach Swinney to Clemson. I think he's a generational coach and there's no coach better for Clemson than Dabo Swinney. I'm very excited to have that put to bed and being able to move forward. His representatives were incredible, and we had great help from Chip Hood in our General Counsel office and Graham Neff. His representatives were Russ Campbell and Patrick Strong really made this whole thing work seamlessly over the last seven weeks when the focus was placed on it. I'm happy for Dabo, Kathleen and their family. More happy for the Clemson family because he will be here and be our football coach for a long while.”

Did they look at Nick Saban’s contract as a barometer?

“That metric is out there, but I think it looks at the value of him to our institution. Really to show the commitment on our side and his. Then you do the math and the numbers and they get to what they are. It was really about showing commitment, solidarity on both sides.”

The Alabama clause in Swinney’s contract

“Everyone thinks that Dabo is going to Alabama (in the media). While we were looking at these things, it really wasn't that difficult as it related to that with his representatives. We were going to have a buyout for all other schools and for that one we put an additional little kicker. It's not the first time we've done that in one of our contracts. We've had other coaches where the buyout increased if they went to certain conferences or some schools. It's not the first time, but this one has a little more sunshine to it.”

When did he think about reworking Swinney’s contract?

“Probably halftime of the Notre Dame game. We had an incredible season to that point but certainly as we were there getting ready for the Cotton Bowl, it was evident that it was going to be time and it was time because the market changed considerably from the last time we did a negotiation with Dabo and his folks. We knew it was going to be this offseason when this happened.”

The comments made by Steve Smith

“Yes. I think we feel very strongly that those were unfortunate comments. We are doing our due diligence, but there is no reason to believe in what we've been able to find that implicates the football program in any of that. It was a very unfortunate choice of words.

“I had a conversation with Coach Brownell. The Board will have some other opportunities shortly to pull together, and we need to do a few a things that weren't able to be handled quickly because of a lot of people being spread out and focused on this particular meeting. We'll make sure to get that done and we'll talk about that in the days to come.”

His reaction to the comments

When did he learn about the comments?

“When it hit the Twittersphere is when we learned about it. There's nothing that's been put out there right now that implicates Coach Brownell. I want to be really clear about that. I think that's where we need to continue to do our due diligence and move forward.”

How confident is he that Brownell runs a clean program

“Very confident. This is a symptom. I'm not sure it's a disease.”

“It was always adding a year and could've had it done in February but Brent was recruiting. Because the salary number didn't change, there wasn't an urgency to get that done, so we wanted to get it done now.”

More on Smith's comments and football

"At this point, there is nothing we have seen that seems to implicate football at all. I want to be real clear about that. There is nothing about those statements that we've been able to find that implicates football."

Is Steve Smith on administrative leave

"No, he is not on administrative leave today. We will continue to talk to Coach Smith, find out what he knows, how he did it, why he did it, what the comments meant and then we will begin to make a decision on where we need to go. And it will be done quickly."

His conversation with Brownell

"We spoke about the process. We had the assistant basketball coaches on the compensation agenda and I said, 'Brad, I don't think it's a good idea for us to do that." he quickly agreed, understanding that we would have other opportunities shortly after we are able to do some work. It was not a long conversation at all."

Radakovich said the appeal to the NCAA is due in the next few days and the appeal will be in on behalf of the two student-athletes. He says he doesn't know about the timing once the appeal is in, but he feels there are some "interesting pieces" that are part of the Clemson report. After the appeal is in the NCAA will set the time period for the decision.

His conversation with Dabo

"I spoke to him yesterday and let him know what we are doing and kind of our background. Of course, Dabo reiterated what we all knew that there are no issues with the football program from that standpoint."