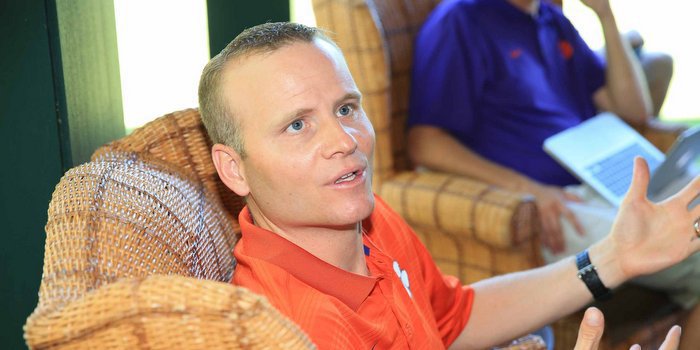 SUNSET – Brandon Streeter is excited about his quarterbacks, not only for this season but looking forward. He has a good reason to be excited.

Streeter, Clemson’s quarterbacks coach, gets to work with perhaps the nation’s best player in Deshaun Watson this season. Behind Watson, however, is a stable of young players who will use fall camp to claim a place on the depth chart.

Kelly Bryant, Nick Schuessler and Tucker Israel will all vie for playing time, and the coaches will get their first real look at talented freshman Zerrick Cooper.

It’s a good time to be Brandon Streeter, who said he’s excited about this season’s possibilities.

“I'm super excited, number one. This thing is just continuing to move forward in a great way, and I believe it's all about the people starting with our head coach and what he represents,” Streeter told TigerNet last week. “The cameraderie with the staff has been an amazing thing and our players see that. They respond to it, and they know when we're on the same page, and we're always on the same page, so that's a big thing. My confidence level in this offense is unbelievable. I think it showed last year. Obviously, it helps with the talent that we had and I had to coach at quarterback, but pay tribute to Jeff Scott and Tony Elliott who have done a great job of developing great game plans and making great calls on the field to help our players succeed. All of us in that offensive room are just so excited about the success we've had and just building on that success and continuing with that in the offense.”

“He's doing a great job. I can't say enough about that kid and just how excited I am to coach him. It's one thing to have a kid that has talent and then it's another thing to have a kid that has talent and the 'want to' factor. Kelly has both of those and has such a high-ceiling potential and he really wants to work hard at it. That makes it exciting for me because he's not just going through the motions, he's working at it. The biggest thing for him is to continue to get the big picture. A year ago, he was just starting off, but now he's progressed each month and he's gotten more and more comfortable with that big picture and understanding not just the offense but the defense and the reaction to all of those things. He's shown me throughout the spring that he's improved in that area. He still needs to improve. Deshaun is way up here in his understanding of the big picture and just playing fast and Kelly is in that mode right now of getting to that point, but he still needs to work on that just so he can see things happen before they do and that's hard to do. It takes a lot of time and he's only been here for a year and a half. He's got plenty of potential and plenty of time to continue improving.”

Where has Bryant shown improvement?

“Definitely as a passer. When he came in here, we knew he could run. He has so much talent athletically and for him to work on his craft as a quarterback has been the goal for him. He's worked on that each and every day and has definitely improved.”

How do you decide who gets the reps in fall camp?

“Number one, Deshaun still has to get his reps to get into playing shape and most importantly to get in sync with his offense and his guys. They've been working hard over the summer. He'll definitely get his reps. Early on in camp, we don't want to overdo it because it is a long season and hopefully a really long season like last year. With the backup guys, Nick and Kelly are guys that are going to be equal as far as reps. They both are doing a great job, but they both will get the next amount of reps. Tucker has had some setbacks. Last preseason he didn't even get to practice. His deal will be showing consistency and staying healthy. He'll get reps and then Zerrick will have a shot, too. He's a guy that's very intriguing and has a ton of talent. In order for him to improve from the knowledge aspect, he's got to get reps. It's all about the experience. I'm going to have to juggle it around and make sure certain guys get different reps here and there but they're all going to have their opportunity. I foresee Kelly and Nick getting the majority of the two reps.”

Who will be number two on the depth chart?

“I know everybody wants to know who the number two guy is but to be honest it's up in the air right now. I'd love for one of those guys to really take the lead and be able to say that this is the guy in all situations. This is the guy we can depend on in all situations. Both of them have their attributes that we like, but neither of them have really stepped into that role of, 'I'm definitely the number two guy,' which isn't a bad thing. They're continuing to compete and what's comforting for me and our staff is that this was a very similar situation a year ago. Those two were two guys as the backup and now we're a year later and those guys have had some experience - not a ton but definitely experience - and a lot of growth in the last year. It's very comforting compared to a year ago because of that. We feel a lot more confident in them being able to take over this offense.”