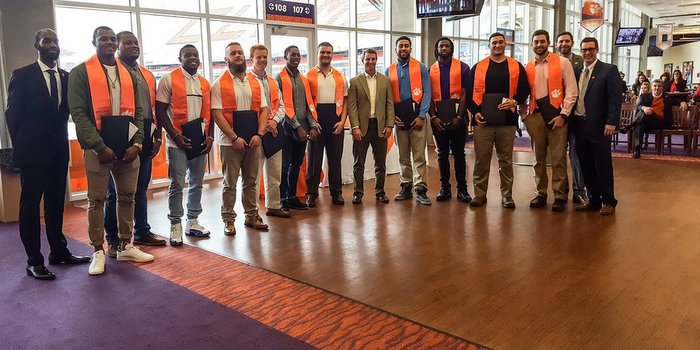 CLEMSON – Dabo Swinney is so involved making sure that Clemson football players graduate, he has former players that played for the likes of Danny Ford and Tommy Bowden returning to school to get their degree.

Nine Clemson players earned their degrees last week, continuing a run of success for Swinney since he arrived at Clemson. Under Swinney’s tutelage, 129 of 135 seniors that were on the roster and played have earned their degrees, not including the nine that graduated last week.

To Swinney, earning the degree matters, and he was on board when the school instituted Tigers for Life, a program that allows former players to come back and finish their degree.

“It was special. We make a big deal about graduation around here in front of the team. Because that's what it is all about. It is incredible,” Swinney told TigerNet. “There are some impactful people who walked across that stage and I am proud of all of them. That is a game-changer. They don't really realize it right now, but they will. That is why you have guys like Terry Allen coming back here. He is back here getting that degree - because it matters. Bill Spiers - played 13 years in the major leagues, first round draft pick out of here, 50 years old, and made a 4.0 in his first semester back. And the reason he is back here is because it matters. If it didn't you wouldn't have these guys back.

“Donnell Woolford has done it all, but he's back here because he isn't complete. Roscoe Crosby graduated. At 33 years old, he graduated, and I have more pride in that than anything. Here is a guy, we all know what he's been through and his path, but eventually they all figure it out, and they realize it's something that they need. Bill told me one time that the thing that killed him the most is that when he would come on a visit here, and they asked the Clemson graduates to stand up, everybody in his family could stand up except him. All of the things that he achieved, he didn't get that done. So it matters. So it's awesome to see these guys get that done in this window here.”

“Just knowing that we can do something that most people don't do is special,” Scott said. “Graduating in three years, that's uncommon. Most people don't do that. Just knowing that if we get this done and tell the story about how we got to where we are and how we did it, that's the biggest accomplishment. Knowing that we have a family. Being the first from our family to graduate is an awesome accomplishment, and that's the biggest thing that stayed in our head. To see the smile on our parent's face is unreal.

Senior safety Jadar Johnson thought about leaving Clemson and transferring to South Carolina St. after a lack of playing time early in his career. Johnson graduated Clemson last week and was voted as a team captain earlier this week, completing what he calls the best moment of his life.

“That felt great. I honestly feel like that's the best moment I've had at Clemson, with football included. Just graduating, that was a proud moment for my mom,” Johnson said. “I gave her my degree when she went back home, and she sent me a picture with my degree sitting next to hers. That was a big accomplishment for me and my whole family is really proud of that. Football, that can end tomorrow. I can go out to practice and blow my leg out and never play football again, but they can't take that degree from me.”

“It was great. It was one of the best feelings I've had in a long time. Just to be able to know that I completed and finished the deal and something that I really wanted to achieve,” Watson said. “That's probably the biggest award that you can achieve at this level is getting that degree and then walking across that stage and seeing your family and friends smile and being happy for you. I'm setting that one for the next generation and for my younger brother and younger sister and all of the people back home in town or across the country that want to achieve these goals, too.

“Graduation, whether I won the Heisman or not, was something that I was going to look forward to because that's something I worked for and achieved and finished. All of the games and awards stuff didn't matter at the time. My main focus was walking across the stage and having fun with my students and classmates.”