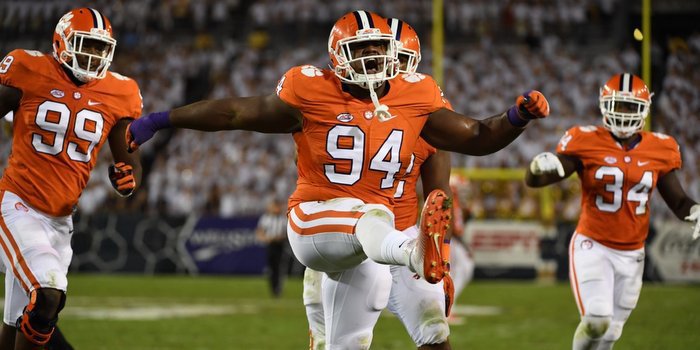 Carlos Watkins and the defensive line were dominant against Tech

ATLANTA, GA – Dorian O’Daniel and the Clemson defense hosted a party in Georgia Tech’s backfield Thursday night, but Ben Boulware wasn’t exactly thrilled with how it all went down because he felt like the defensive line didn't leave enough plays for the linebackers.

Clemson held Georgia tech to 124 total yards in the Tigers’ 26-7 victory at Bobby Dodd Stadium, the fewest yards the Jackets have gained in Paul Johnson's nine seasons at the helm. The previous low was 155 total yards vs. Iowa in the Orange Bowl in 2010.

Georgia Tech's seven points matched the fewest that it has scored in an ACC game under Johnson. The Jackets also scored seven points at North Carolina (Nov. 8, 2008) and at Miami (Fla.) (Oct. 22, 2011).

The party show was set up by the Tigers’ dominant defensive front, led by senior Carlos Watkins and freshman Dexter Lawrence. The Jackets averaged 2.5 yards per rush (38 carries for 95 net yards) and 2.4 yards per play. Quarterback Justin Thomas was just 4-for-13 through the air for 29 yards.

The Tigers had seven tackles for loss, led by O’Daniel’s two. O’Daniel was second on the team with nine total tackles, marking the third straight season he’s had a dominant performance against the Jackets.

“It was exciting. I know a lot of people have high expectations of me in this game because of previous years, and going into it I was motivated to continue making those plays,” O’Daniel said. “My main goal going out there was just to go out there and have fun, and worry about my assignments and my keys and the rest would fall into place and it did.”

Carlos Watkins and the defensive line were dominant against Tech "

“It was awesome. It was a party in the backfield all night,” O’Daniel said. “When one guy made a play, it was like the whole team made a play. Everybody was celebrating and everyone was excited for everyone. That is the kind of selfless attitude this defense needs.”

Linebacker Ben Boulware, who led the team with ten tackles, credited the defensive line with shutting down Tech’s offensive rhythm.

“That’s our d-line. Me, Kendall (Joseph) and Dorian didn’t do anything (on the first drive). That was all Carlos, Christian (Wilkins), Dexter and Scott (Pagano). They’re probably the main reason why we played so good tonight. A lot of times the ball didn’t get past them because they were just engulfing everything up. It’s because of them. It’s fun because I don’t have near as many linemen on me because they’re taking up those guys, but it takes away plays that I want to make.”

“Dexter has like 20 tackles in the first couple of games. Him, Carlos and Christian aren’t even allowing the ball to get to our level,” Boulware said. “I’m grateful, but I’m also like, ‘Hey, I want to make some plays, too.’ Tonight, it was awesome, especially them keeping guys off of us. I was cut a lot more last year and I think I got cut once tonight because I was being lazy. The whole game they just contained everything. They whooped that offensive line. I don’t mean to disrespect Georgia Tech, but just watch the tape.”

Watkins, whose first quarter sack on Thomas was the 500th tackle for loss for Clemson under Brent Venables, said it was all about playing in Tech’s yard.

“Coach (Dan) Brooks really pushed us this week and Coach (Marion) Hobby kept telling us to play in their yard,” Watkins said. “With the option, if we penetrate the line of scrimmage, it’s hard for them to run plays. Our mindset was to be disruptive and we did it pretty well today.”

Clemson held Tech to just 71 yards rushing in last season’s 43-24 win, but O’Daniel said Thursday’s win was more dominant, but the Tigers can’t enjoy it for long with third-ranked Louisville waiting on deck.

“They got more yards on us this year than they did last year because of the few wide-open plays that they got, but as far as complete defense I would say this is a dominant performance,” he said. “We are going to enjoy the win tonight and focus on Louisville tomorrow.”