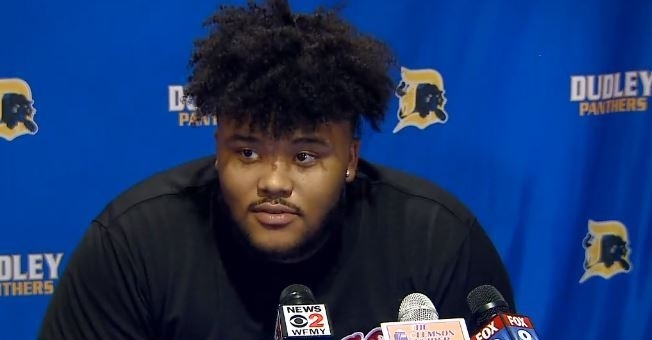 Payton Page doesn’t know what the North Carolina High School League will decide when it comes to playing football this fall, but if the season is moved to the spring, he is fully prepared to skip his senior season and enroll at Clemson early.

Clemson continued to roll in the 2021 recruiting cycle Tuesday when Page announced his commitment to the Tigers. Page, a 6-foot-4, 360-pound defensive lineman out of Dudley High School in Greensboro, North Carolina, is the No. 31 prospect overall, according to ESPN's rankings.

He had a top three of Clemson, North Carolina and Tennessee, and the Tigers survived a late push by the Tar Heels.

“I called Coach Bates and he was kind of hyped. I told Coach Swinney about a week ago and told him,” Page said. “He knew then and he was telling me then that it was crazy. But then he asked if I was ready to be All In, though, and I said yes, of course.”

What is next for Page? It depends on the North Carolina High School League.

“I will probably enroll early. We will probably have a season in the spring, and I won't be able to play because I am planning on going to Clemson in January,” he said. “Enrollment. That is the next thing on my schedule. Coach Venables told me he was going to send me the playbook and I will get started on that.”

Page’s parents were also on board with his decision.

“They knew a couple of months ago that Clemson was where I would go,” Page said. “My dad didn’t really say a lot about it. But education is very important to me and I wanted to go to a place where I could be successful. My mother is a teacher and she really loves that place. I know I will get a good education there. My mom was really impressed by everything she saw.”

Page is the third commitment for the Tigers from North Carolina for the 2021 recruiting cycle, joining running back Will Shipley and defensive Zaire Patterson.

Page tallied 71 tackles, 26 for loss, with three sacks and six QB hurries as a junior. He’s totaled 55 TFLs and 13 sacks over his high school career.

He picked up a Clemson offer last June.

Page is a second consensus top-100 prospect in Clemson's D-line commitments, joining DE Cade Denhoff and also the 4-star Patterson on the D-line.

Another great day to be a Clemson Tiger! pic.twitter.com/KCl1e42jlI