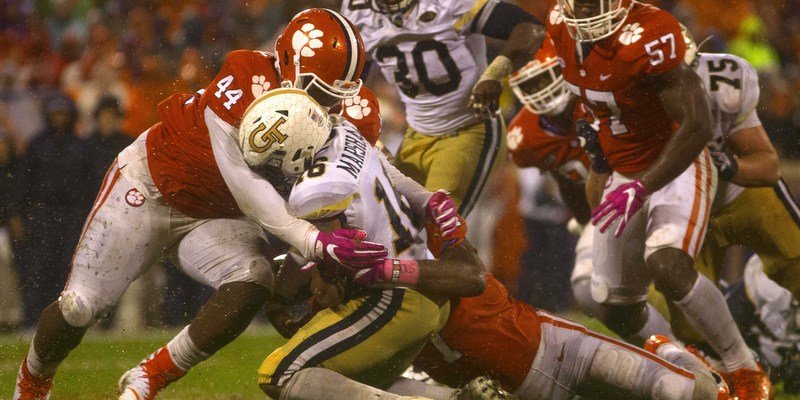 Another compelling weekend of college football is in the books, and Clemson is very much in the hunt for a third consecutive berth in the College Football Playoff.

The initial College Football Playoff rankings will be released Tuesday evening, and I expect Clemson to be ranked anywhere from third to fifth. The Tigers body of work is impressive – more impressive than some undefeated teams, like Miami – and they’ll be firmly in the mix as long as they keep winning.

TCU and Penn St. both lost Saturday, setting up a shakeup in the polls and the initial playoff release. It also sets up an intriguing final month of the season for everybody. Heck, the Big 10 race is going to be fun to watch, just to see if Ohio St. can ride the momentum from Saturday’s win over the Nittany Lions and make it back to the playoff.

If I was doing the rankings, teams six through ten would look like this:

10. TCU – lost to Iowa St. as the offense didn’t score a single point. The Big 12 race will be chaos the rest of the way.

9. Oklahoma – beat Baylor in a shootout. Lost to Iowa St. a few weeks ago. Has a big win at Ohio St.

8. Miami – Yes, the Canes are undefeated. But they will be tested the next few weeks with games against Virginia Tech and Notre Dame. They have issues, and I can see them going 1-1 or 0-2 in that stretch.

7. Wisconsin – The Badgers are 8-0, but their best win might be over Florida Atlantic. Their division is awful, and they don’t have to play Ohio St. or Penn St. this season.

6. Penn St. – The Nittany Lions had it all. They had a big lead at Ohio St. and a clear path to the Big 10 title game. Now they have to rely on other teams while winning out. Yikes.

Now for the top five:

5. Clemson – the Tigers have six wins against power five conference teams with winning records, easily the best mark in college football. The loss to Syracuse, however, will continue to be a black mark on the season. That’s why Notre Dame is..........

4. Notre Dame – The Irish have played a tough schedule, and their lone loss is to undefeated Georgia.

3. Ohio St. – The loss to Oklahoma is a distant memory. I am still not sure this one of the best teams in the country, but the win over Penn St. has them firmly in the mix.

2. Georgia – The Bulldogs have been impressive in running the table. But that schedule is easy, easy, easy. This week they get South Carolina.

As for Clemson, Saturday’s win over Georgia Tech was more of the same in the series, especially since Brent Venables arrived on campus. The final margin was 14 points, but it seemed like more. After Clemson forced Tech to kick a field goal and then went up 14-3, the game never seemed like it was in doubt.

I remarked on Twitter that Tech head coach Paul Johnson would blame his blocking after the loss – it’s always the blocking – and he didn’t disappoint. But if you go back and watch the video, you understand it’s hard to block somebody when you’re getting pushed three and four yards back into the backfield.

Yes, Venables has been a big part of Clemson’s success against the option, but the defensive linemen the Tigers have been recruiting also are a big part. It’s hard to recruit offensive linemen good enough to compete against cats like Clelin Ferrell, Austin Bryant, Nyles Pinckney, Christian Wilkins and Dexter Lawrence.

As for Lawrence – we saw him come out of the game after the first drive and play sparingly the remainder of the game. I went back and watched the video, and he was the recipient of two brutal blocks by Tech’s overmatched line.

Here are the videos of the blocks that came on the game’s first and third plays. One player hits Lawrence low, while another falls on his legs from behind. That’s not just dangerous and dirty, it’s almost criminal. That’s how careers end. And you can tell the ACC official saw it, because he goes over to the Tech lineman after the play to talk to him about it.

Here is the first play... OL hits Dex low and another OL falls on his legs from behind. pic.twitter.com/g2tIvr87UH

Dabo talked about dirty blocks by Tech last night. Check out Big Dex on the game's third play... This is how careers end. pic.twitter.com/vq0NnyEf59

In this edition on a lighter note. Heavy rain began to fall about an hour before kickoff but that didn't deter several of the coaches' sons from dancing in the downpour. Clay Swinney - the youngest son of head coach Dabo Swinney - had the most fun and is in the middle of these videos. Joining him are Drew Swinney, Jake and Tyler Venables and Tanner and Trent Pearman.

Swinney's message to his team to have fun and embrace the atmosphere was apparently heard by everyone.