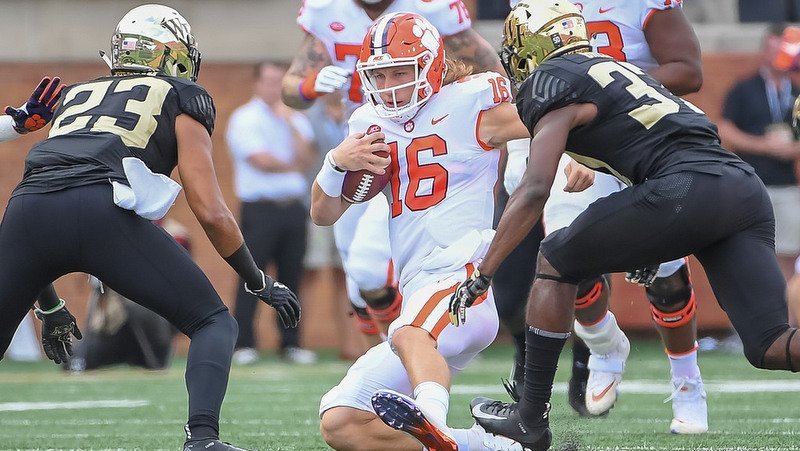 Simpson, the big left guard for the Tigers, met with the media Monday in the Poe Indoor Facility and he was asked about the success the Tigers have had in the run game over the last few weeks, ascending to fourth in the nation.

His answer was simple.

“The way we run the ball we have obviously done a good job and as an offensive lineman we take a lot of pride in that,” Simpson said. “That is something we want to continue to do as the season continues.

"We do everything the same. I think it has something to do with Trevor being back there. He can throw it. So a lot of people play a different kind of defense and it opens up the run game. That is what I am assuming.”

As for the bye week, Simpson says he went fishing with Cade Stewart and earned his Concealed Weapons Permit. He says he and his girlfriend were the only ones to score a 100 on the test.

*Co-offensive coordinator Tony Elliott says he is pleased with freshman running back Lyn-J Dixon, but Dixon has to continue to earn snaps in practice.

“He has to continue to show up in practice to earn those meaningful snaps. But you see it in practice, he tries to score every single time, just like Travis Etienne,” Elliott said. “As we go down the stretch, as he becomes more comfortable, the biggest thing for him is learning how to pass protect. You can tell coming out of high school he wasn't asked to do that much. I am pleased with his progression and I am comfortable with him being that fourth guy.”

Elliott said the off week isn’t an advantage for the Tigers.

*I asked defensive coordinator Brent Venables about using the off week to look back at the first half of the season, and he said, “It’s painful, because you always go back and look at the bad stuff.”

As for his downtime, he said he took his daughters fishing and told the media the girls caught some big ones, measuring about three and four inches with his fingers.

Venables said NC State head coach Dave Doeren is a good friend (they are both from Kansas) and he recommended Doeren to former Kansas coach Mark Mangino when Mangino was with the Jayhawks.

*Amari Rodgers said the height on the punts by the Syracuse punter caused him problems.

“I’ve never seen anything like that,” he said. “I don’t want to use that as an excuse but they were high. It meant a lot to me that the coaches had faith in me and put me back out there against Wake Forest.”

During his downtime, Rodgers went to Los Angeles to spend time with his dad, Southern Cal offensive coordinator Tee Martin.

Rodgers said Pac-12 football is different and focuses more on the skill players rather than the line of scrimmage, but said he loves Los Angeles and thought the environment in the Coliseum was great. He also ran into former Trojan and current Philadelphia Eagle Nelson Agholor. Rodgers spent time with Agholor during the spring and credits Agholor with helping him turn the corner on punt returns.

Rodgers made the trip to Cali with his younger brother.

Rodgers also had a comment about Lawrence, saying Lawrence's arm strength and his ability to get the ball to the sidelines quicker than other quarterbacks makes the screen game better.