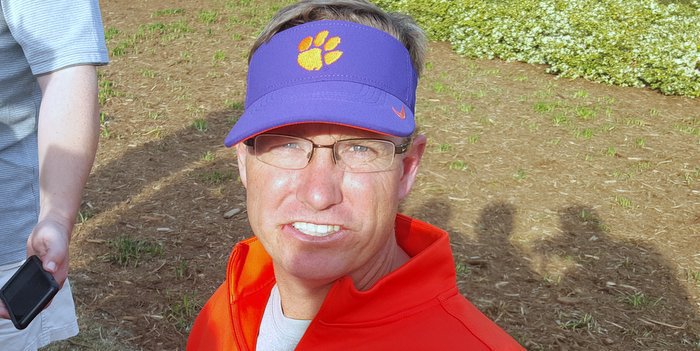 Conn talks to the media after Friday's practice

CLEMSON – Mickey Conn is just a part of Grayson, and to say that he was entrenched at the Loganville, Ga., school would be an understatement. In many ways, Mickey Conn IS Grayson High School football.

So why leave a program that he built – from the ground up – and take a job as an assistant on a college team a hundred miles up the road? The answer would lie in the salesman turned head coach named Dabo Swinney.

The only football coach in the history of Grayson, which opened in 2000, Conn has a career coaching record of 137-48 and led Grayson to a state championship in 2011. Along the way, Conn turned Grayson into a Georgia state power that churns out Division I football players at a high level, so there were eyebrows raised when it was announced last week that Conn accepted a defensive analyst’s job on the Clemson staff.

Why leave Grayson for Clemson? Conn said it wasn’t easy but he had an easy answer.

“A man like Dabo Swinney, who is just an incredible man who has built an incredible program. I just wanted to be a part of something big like that,” Conn told TigerNet Friday. “It was very emotional and very hard to leave a place like Grayson. Grayson is a special place. I bought the first football and built the stadium and everything that's been there. It was just a patch of grass when I got there. But I am excited to start something new and I am excited to help my friend. I am not only tied in with the high school but I had the ninth graders and the JV and then the program all the way from six years old and up. I was very entrenched in it.”

Conn talks to the media after Friday's practice "

Swinney surprised Conn with the offer a few weeks back.

“Me and my 12 year old son Brody were driving home from baseball practice about three weeks ago and I got a call on my phone,” Conn said. “I look down and it's Coach Swinney calling and I'm like, 'What in the world does he want?' I picked up the phone and he said, 'Hey man, I've created a job and I want to bring you up here to Clemson. What do you think?' I was just speechless. He said, 'Are you interested?' And I said, 'I'm definitely interested. Let me go home and talk to my wife Haley and my other son Spencer and Brody.' He said you've got some time so just there and think about it and pray about it and let me know. That's how it happened on a Tuesday or Wednesday night.”

Conn then detailed his duties.

“He's (Swinney) created a job called the senior defensive assistant and I'll be working directly with the defensive staff,” Conn said. “I'm not allowed to coach the players on the field, but I can help with the coaches, the game plan, the film work, things of that nature and give input. I can be another set of eyes to help Coach Swinney. No coaching the players. After 18 years that will be different. I will help the coaches. I can be on the sidelines and I can be at practices. I can be in the box and I can do all of that stuff to help the coaches, I just can't directly go to a player and say, 'Hey, you can do this' or 'You have to get into your backpedal.' I can't go off campus in recruiting. And when the coaches go out on the road I will be here controlling the defensive room and helping with the players and keeping the players accountable while I am on campus.”

At the end of the day, Conn felt like it was the perfect opportunity at the perfect time.

“It's really special. Dabo is a dear friend. I played with him at Alabama and I love him to death,” he said. “I'm really thankful for this opportunity that he's given me. I'm hoping I can give something back and help him.”