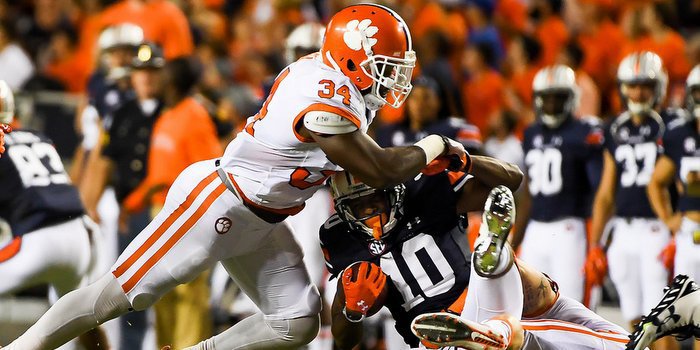 CLEMSON – As Clemson linebacker Kendall Joseph ran through his pre-game stretching routine on the field at Jordan-Hare Stadium last Saturday afternoon, he took the time to look into the stands and think about his journey.

Joseph redshirted in 2014 and was poised to take over a starting role in 2015 when injuries derailed a good portion of his freshman campaign. Senior B.J. Goodson took over at middle linebacker and parlayed his final season into a spot with the NFL’s New York Giants.

Joseph played just 63 snaps – recording 11 tackles – as he continued to get healthy and wait for another shot. Clemson signed 5-star linebacker Tre Lamar in the 2016 recruiting class – the heir apparent in the middle – but Joseph kept working as Lamar grabbed the headlines.

Joseph’s hard work paid off Saturday night when he led Clemson with 10 tackles, recording a sack, and spending a majority of the evening in the Auburn backfield.

“When I was going to warm up, I was going around the field and I was praying and really just appreciative because it was like full circle,” Joseph told TigerNet earlier this week. “This time last year, I was playing, but i wasn't healthy. Thankfully, right now, I'm healthy and hopefully I continue and I was just really appreciative of the moment. It feels good. It's a blessing.”

Joseph said it was worth the wait. 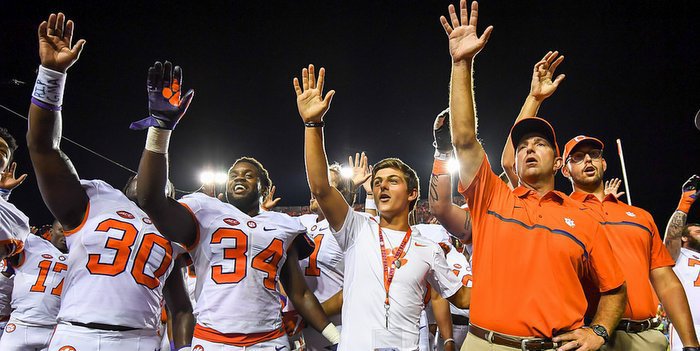 “It felt really good. You feel like you're ready, but you never really know until you get out there,” he said. “You just prepare really hard and recognize all of the formations that you prepare for. It felt really good to go out there and just play hard and make an impact for my team.”

For his effort, Joseph won the ACC Linebacker of the Week.

“It feels awesome. I just found out about thirty minutes ago and I was kind of shocked to see it,” he said. “But, I've worked really hard for this moment and I just got to keep it up. That's in last week, so hopefully I can get it again this week and keep working, striving to get better.”

On the defense playing well and helping the offense

“It feels really good. It's a team sport, so you have to be able to complement each other and pick each other up. I'm sure there will be games where the offense has to pick us up, so we're just doing our job and holding down our side of the ball and keeping the offense up and supporting them. We're just really working hard to help us get a win at the end of the day.”

On the defense not getting any credit

“We took it personal, but not because the offense is getting their praise. We have a lot of people that left last year for the draft and there were a lot of unknowns. People doubted us and you take that to heart and we wanted to represent and we wanted to show that we can do what we need to do to help our team win.”

What he can do to get better

“Coverage is always a thing I have to work on, and it's just really technical and I like to be physical and hit. I'm not a bigger guy, but I'm not scared to bring it. I like being physical and playing downhill.”

The play of the defensive line helping the linebackers

“It helped us 100 percent. I wouldn't have made as many plays as I did without the d-line. Big Dex, Christian and all of those guys did a great job. Without them, linebackers can't make plays so they took up a lot of holes and a lot of lineman and they played great. They did awesome. Without them, linebackers couldn't make any plays. They take all of the beating, the punishment, the hitting the 320-pound lineman and they did a really good job by staying in their gaps and letting us fill.”

“He did good. He's so mature and just he didn't look too overwhelmed in the moment. He looked very comfortable and I know he was itching to get out there. When he got out there he made a few plays and I was happy for him. He's only going to keep getting better week by week.”

What Brent Venables has meant to his career

“He gets all of the credit. He demands a lot and that is what he expects to get every day. He doesn't take no for an answer. It takes a while to adapt to his coaching, but after you get the hang of it - he just wants you to be great. He sees the potential in you, so he's going to demand it out of you and it just makes you a better player overall. He puts us in the right position to make plays and it was really good.”

“The Hail Mary, when Jadar (Johnson) jumped up, tipped the ball and tipped it again. That's the biggest play of any game. The athletic ability that he had to knock it down twice was really big.”