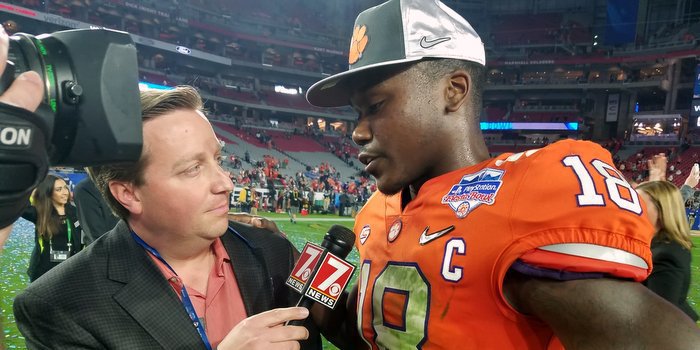 Johnson talks to the media after the game

GLENDALE, AZ – Jadar Johnson was right after all.

The two faced off in the pregame coin flip – it looked like an awkward exchange – and things got worse for Barrett after that as he finished 19-33 for 127 yards and two interceptions. He also had 11 rushes for minus two yards.

Johnson was all smiles after the game, and said he didn’t doubt his teammates would back up his boast.

Johnson said he was a little surprised to see Barrett at the coin flip, but that the exchange wasn’t as bad as it looked.

“It wasn't that awkward. He went to shake my hand and I went fist pound him, Johnson said. “It was weird. He was probably like, 'Oh, he's being funny.’ It was kind of awkward but I didn't really say anything to him, but football had to be played. We went out and played football and our defense did our thing and we came out with the W.”

Clemson shut out Ohio St. 31-0, the first shutout for the Buckeyes since a 28-0 loss to Michigan in 1993, and Johnson said the defense felt confident they could throw a zero on the board.

Johnson talks to the media after the game "

“We felt like that before the game even started. We were just really confident in our preparation and our game plan,” he said. “We were just ready to get on the field. We were ready to play football. Everybody on defense, their whole mindset was just to dominate and that's what we went out there and did.”

He then said that Saturday’s win had its genesis last January.

“It all goes into the preparation that we put into it. It started back in January and waking up at 5:30 in the morning, all of the hard workouts all the way through the summer and coming out to practice every day,” Johnson said. “It's just paying off. It feels really good to get a win like that against a program of that caliber.

“Just the same preparation we've been doing all year (against Alabama). We don't want to change nothing up. We've been giving a championship effort all year, so it's going to be the same preparation and the same type of week. We just have to go in and stay focused. As long as we stay focused on Clemson football, we'll be fine. It doesn't matter who it was. Whoever lined up against us, I don't care if it was the Dallas Cowboys, we're going to come out there ready to play. I feel like if we play to the standard of Clemson, we'll be okay.”

Will there be any bulletin board material this week?