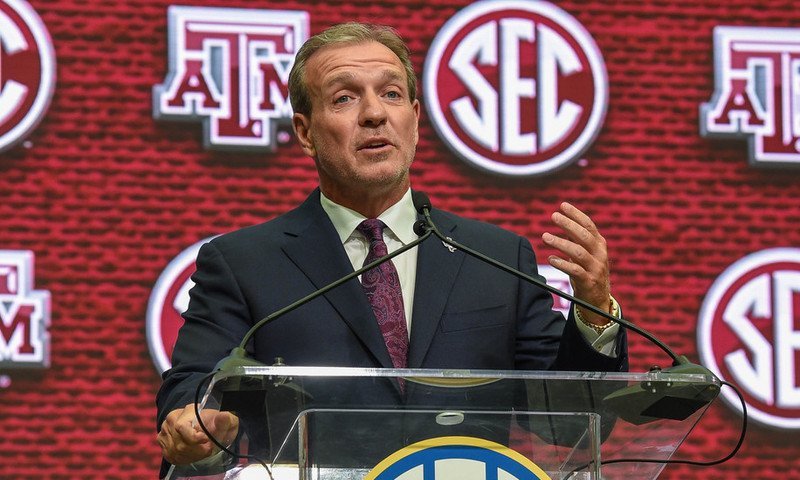 Jimbo Fisher says the Aggies have a heck of an opportunity Saturday (Dale Zenine-USA TODAY Sports).

Jimbo Fisher and his Texas A&M Aggies are looking at Clemson as one heck of an opportunity in front of a classy fanbase.

No. 1 Clemson takes on No. 12 Texas A&M Saturday at 3:30 p.m. in Death Valley (ABC), the first of several opportunities for the Aggies this season. Texas A&M has to play Auburn, Alabama, LSU, and Georgia later this season, a gauntlet of ranked teams.

It starts Saturday in Clemson.

“I mean, it's the next opportunity. That's the thing you gotta understand,” Aggies head coach Jimbo Fisher said. “There's a lot of 'em on there, but this is the next one you gotta focus on. They're the defending national champs, number one in the country, and you have to go in and play it like that. But you know, before you play the game you have to prepare, and I think that's what we have to do. A great job of preparing during the week and not being ready to play until it's time to play, but the understanding of how to prepare. But it's a heck of an opportunity. That's what you need.”

Fisher said he’s told his team about what to expect in Death Valley.

“The venue. It's one of the best places to play college football. It's Death Valley. It'll be loud,” Fisher said. “A lot of orange. If you like orange, there'll be a lot of that. A lot of happy fans. They're a great fan base, tremendous fanbase, classy fan base, but very loud and hard to go play. And, you know, it's just like in our league. It's like the venues you're going to and play in our league, and, it's 80 something or 90,000, whatever it is, and they love their ball and they're very good. They're passionate about it, that's for sure. It's one of the places, being able to say you played there when you're a player, and one of the venue's you can say you were able to coach and you definitely want to have been to Death Valley. It's a great atmosphere."

In one of the top college football games of the 2018 season, Clemson held on for a 28-26 victory over A&M in front of 104,794 fans on September 8, 2018. Trailing 28-13 entering the fourth quarter, the Aggies scored a pair of touchdowns in the final frame and cut the lead to two with 46 seconds left in the contest. The 2-point conversion attempt was intercepted to secure the victory for the Tigers.

Many of the players that stood out in that contest have moved on, but Fisher says Clemson hasn’t changed too much.

“That's an outstanding football team, Dabo's done a tremendous job. Everybody says where is their strength at, when you win the national championships and you're ranked number one, you're good in all three phases,” Fisher said. “Offensively, extremely talented quarterback. We all know where it starts. But those wideouts are tremendously talented…the whole crew out there. The young guys they got, they brought in, you could just see those guys in what they do. The offensive line is very good. Replaced some guys up front, but, you know, even bigger and stronger.

“(Travis) Etienne, he's a very, very talented running back. He's big, he's strong. He's direct. Fast. Can run with speed, power. Catches the ball. Trevor (Lawrence) is excellent. I mean, very, very talented team. Very well-coached. Defensively, really lost a lot of D-linemen, but the same time it looks like just the same bodies in different numbers. I mean, guys running around making plays. They were dominant upfront. They can rush the passer, they can play the run. The backers are active.

“Brent (Venables) does a great job on defense. Multiple looks, different schemes, blitzes, (A.J.) Terrell leads the secondary back there, those guys are all very talented and do a great job. They play the ball, they're used to playing it, they see it in practice. Special teams, their kick-off guy's kicking it kicking a mile. The field goal guy, punters are excellent. You have a heck of a team, this is one heck of a team. It's talented, it's well-coached, it's confident, and they're playing at home. So it's gonna be a heck of a challenge for us and hopefully something our kids are up for and we look forward to going to play.”