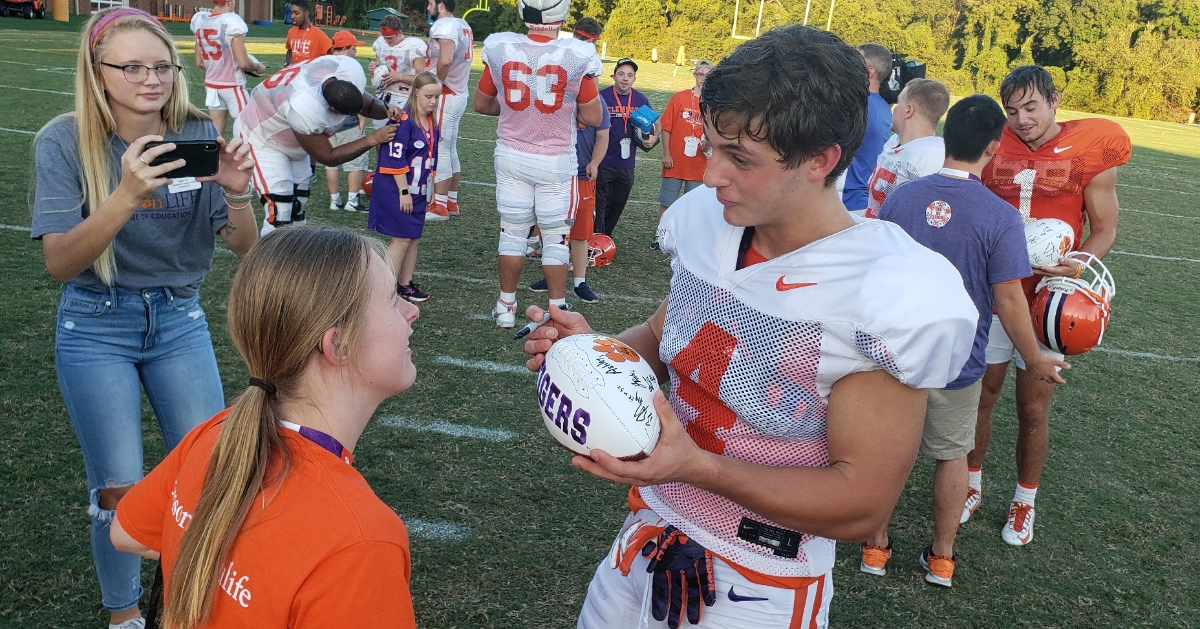 Dabo Swinney poses with a student after practice Wednesday.

CLEMSON – Dabo Swinney found himself surrounded by adoring fans following Wednesday’s practice. They called out his name, threw friendly nudges at even their best friends and clamored for a moment with the Tigers’ head coach.

He had time for them all, and even knows many of the upperclassmen by name, which brings out the brightest of smiles. Yes, it was the day the ClemsonLIFE program visited a Clemson practice.

ClemsonLIFE is designed for students with intellectual disabilities who desire a postsecondary experience on a college campus. The program offers a collegiate experience that prepares young men and women with intellectual disabilities for competitive employment and independent living through a combination of academic coursework and career exploration.

Swinney loves to say that the only disability in life is a bad attitude and there were no bad attitudes on the practice field Wednesday. Just a whole lot of love and fun that exemplifies what the Clemson family is all about.

“It's a blast. It's one of the first things we put on the calendar every year. We do a day in the fall and in the spring we do a county fair,” Swinney told TigerNet. “They hang out and play games and eat hot dogs and have a fun time in the facility. Then, they come out for the last part of practice and get a chance to meet the guys. In the spring, our guys do a county fair with them. It's a blast.”

Swinney knows all of the seniors, who have been a part of his life for the last four years. 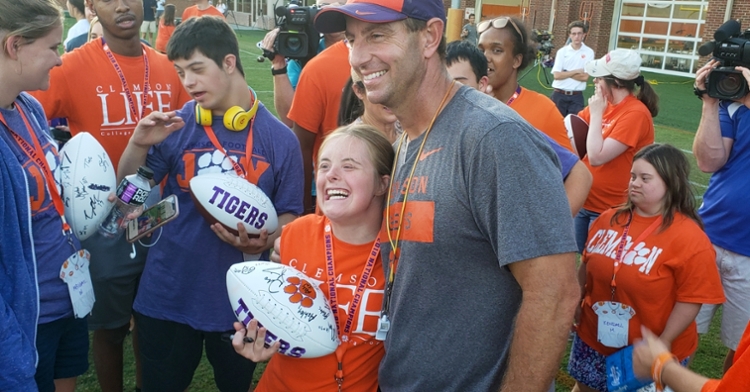 Dabo Swinney poses with a student after practice Wednesday. "

“I love meeting the new students every year. It's kind of sad, too, because you have the seniors,” he said. “It's just like your team. They come and go and they graduate. The next thing you know they've been here four years. It's crazy. It's such a wonderful program and it's awesome for our new people on the team every year to learn about ClemsonLIFE and to learn what it's all about. Hopefully, they get a chance to see them on campus and develop friendships and relationships with those students. It's a really unbelievable program and something that we're passionate about supporting.”

“No question. It goes back to how I was shaped in my seven years with Coach (Gene) Stallings. John Mark was at practice every day,” Swinney said. “I grew up with a young lady Sue Ann and she was Down Syndrome. I played ball with her brother. Then I get to Alabama and John Mark is there every day. For seven years, I'm with him as a player and a coach. Just watching how Coach interacted with John Mark and how he involved him in everything and how John Mark just became a part of our team.

“He knew everybody. Even though sometimes people may look different, learning is for everyone and we're all people and we're all made in God's image. That’s just what I believe. It's a great perspective, I think, especially for these big, strong, fast athletes that sometimes can lose perspective. I think it's a great perspective to see such happy people that maybe sometimes the world may look at and see they have a disability but their joy, their attitude is amazing.”

One young lady grinned shyly as she got an autograph and hug from quarterback Trevor Lawrence, and wide receiver Drew Swinney’s smile was bigger than the smile worn by the student asking him to autograph a football. Another ClemsonLIFE student couldn’t wait to see Clemson safety Nolan Turner – the two went to high school together in Alabama.

“Their love of life and they're just so talented and they're smart. It's as competitive to get in the ClemsonLIFE program as it is to get a scholarship to come play football at Clemson,” Swinney said. “It's incredibly competitive. It's something I got exposed to many years ago. I didn't even know we had a ClemsonLIFE and it's something we found out about, so we got involved. David graduated and became a part of our staff. Marsden works out in the front for us. It became a very key part in our foundation in raising money so we can help them bring in as many kids as they can.

“It's an unbelievable program that empowers and equips these young people to live on their own and to get the skills that they need to be successful in life. It's perspective and taking what you have and making the best of it and not letting other people label you. I always say the only disability in life is a bad attitude. That to me is so true. If you have the right type of attitude then you've got everything.”