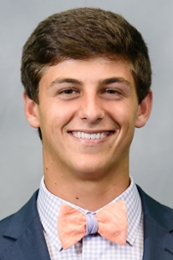 
Original walk-on and son of head coach Dabo Swinney who appeared in four games in his redshirt season in 2018 … enters 2020 having caught two passes for 11 yards in 36 career snaps over 12 games.


2019: Caught two passes for 11 yards in 19 offensive snaps over eight games … gained 11 yards on his first career reception on a pass from Taisun Phommachanh vs. Charlotte … added a reception vs. Boston College.


2018: Played 17 snaps in four games while redshirting … made collegiate debut vs. NC State … also played vs. Louisville and vs. Duke … made postseason debut in Cotton Bowl vs. No. 3 Notre Dame.