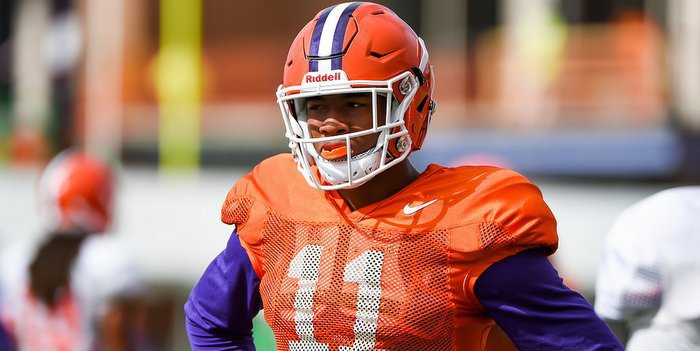 Isaiah Simmons is one of those athletes that gets your attention when you see him, whether it’s walking across campus or on the football practice field.

Or getting off the bus.

The redshirt freshman safety arrived on campus last summer hoping he would contribute to an already-competitive secondary, and he was on the redshirt bubble heading into the final days of fall camp. However, with starters Van Smith and Jadar Johnson poised to take the majority of the snaps and reserves like Tanner Muse and Denzel Johnson ready to contribute, the coaches made the decision to redshirt the Kansas native.

Simmons waited patiently, learned the playbook and now is looking forward to spring practice and a chance to compete for a spot on the depth chart.

“Honestly, since the day I found out I was redshirting I haven't been able to wait for spring. I've been counting the days down and making sure that I'm going to be ready,” Simmons told TigerNet. “Honestly, I'm very glad I did because it helped me continue to develop and become a better player than what I was.

“During fall camp, I had a role at the dime position so I was thinking that I'm going to be playing and then over the last few days the coaches decided that it would be best because I would only end up playing like 100 snaps at dime and in the long run it's not really worth wasting a year.”

Simmons, who says he clocks in at 6-3, 222 pounds, hopes to bring his physical style of play to the defense.

“I wouldn't say I'm a coverage guy. I'm more of a hitter. I like to hit a lot. I'm mostly going to be that size and physical safety,” he said. “But I learned this year that technique is the biggest factor in playing because without technique that's what separates you from the competition, so I’ve been working hard on that.”

“Special athlete. Really special athlete,” Swinney said. “Another guy that was kind wild in our Power Hour group. He looks good getting off the bus. He's going to be a good one.”

Simmons does more than look good, however. He has the speed to play anywhere on the field, including wide receiver. He was first-team all-state as a defensive back, but he had some great stats on offense his senior season.

Simmons had 92 tackles on defense and had 29 receptions for 994 yards and 13 touchdowns, an average of 34.3 yards per reception in his first year as a receiver. He had a long touchdown catch of 82 yards and had 23 rushes for 148 yards and two scores while adding 98-yard kickoff return for a score.

He was also a track standout, and he says all of that experience can only benefit him at safety.

“I would probably say it's because I can carry my weight and my speed,” Simmons said. “I was always a track guy growing up, so I've always been able to run. Also, I can cover the field because of how long I am, of course.”

With a season under his belt, Simmons is now ready to show defensive coordinator Brent Venables that he can be trusted and earn those snaps he craves.

“Coach Venables is the guy that really cracks down on everybody because he knows the defense better than anyone ever could,” Simmons said. “He knows what's going on even though he's not looking at you. Having him as a coach, you really don't have a choice but to do the right thing and be in the right spot or else he's definitely going to know.”