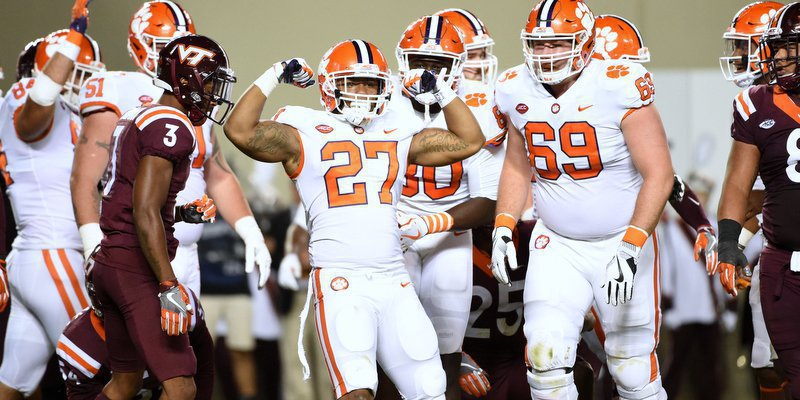 Ray-Ray McCloud points out the first down

BLACKSBURG, VA – The cream always rises to the top, and in Clemson’s third Top-15 matchup, the Tigers did just that.

Clemson (5-0 overall, 3-0 ACC) has played three Top-15 teams in September – Auburn, Louisville and Virginia Tech – and after a 31-17 win over the Hokies (4-1, 0-1) Saturday night at Lane Stadium, the second-ranked Tigers are the only team in the country to accomplish such a feat.

The Tigers became the first team ever (in the AP era) to beat three Top-15 teams before Oct. 1.

OFFENSIVE PLAYER OF THE GAME: A running quarterback has been Virginia Tech defensive coordinator Bud Foster’s kryptonite and Saturday was no different. Kelly Bryant made the Hokies pay with his legs and made just enough plays with his arm to keep the defense honest. Bryant carried the ball 19 times for 94 yards – a 4.9 yard per carry clip. He completed 12-of-21 passing for 186 yards and a touchdown.

DEFENSIVE PLAYER OF THE GAME: Dorian O’Daniel continued his stellar season Saturday night. The Maryland native had 10 tackles, a sack for an eight yard loss, recovered a fumble caused by Dexter Lawrence and had a pick-six – the second of the season and his career. 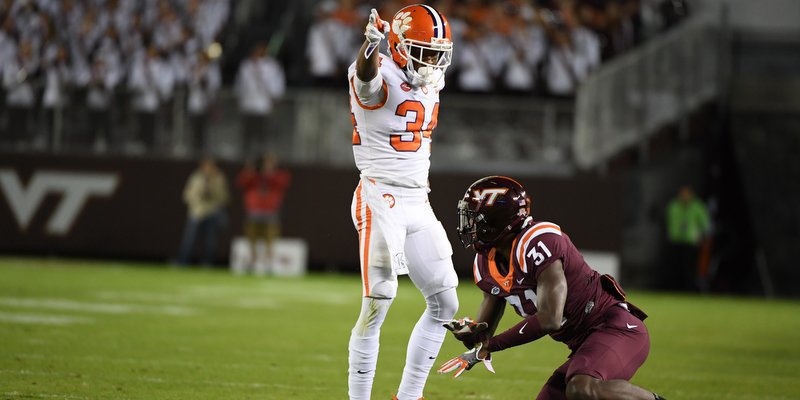 Ray-Ray McCloud points out the first down"

Spence gets his first: Clemson drove down the field on its first possession but was stymied on the goal line after a false start penalty on third down. Alex Spence lined up for his first career field goal and knocked it through from 23 yards to put the Tigers on the board with a 3-0 lead.

Feaster’s first receptions: On the ensuing possession, Tavien Feaster notched his first and second career receptions. The second was pass in the flat and a 60-yard race to the endzone for his first receiving touchdown.

Special team’s woes: The punting game has been pretty good through the first four games, but outside of a 51-yard punt, Saturday night was a struggle. Early in the fourth quarter, Spiers booted a line drive that was returned 43 yards to the two-yard line, setting up Virginia Tech’s first touchdown of the night, making it a 24-10 ballgame. Elsewhere in the kicking game, Spence missed a 41-yard field goal in the first half and reserve Christian Groomes kicked a kickoff out of bounds in the fourth quarter.

O’Daniel to the rescue: After the punt return and the Hokie touchdown, Clemson’s offense struggled to move the ball, giving the Hokies all of the momentum. However, a tipped pass by the Tech receiver landed in the hands of O’Daniel who returned the interception 22-yards for the touchdown, giving Clemson a 31-10 lead and a little breathing room.

UP NEXT: Clemson will be back in Death Valley next Saturday for a high-noon matchup with Wake Forest, who lost in heartbreaking fashion to Florida State. It is Homecoming for the Tigers.