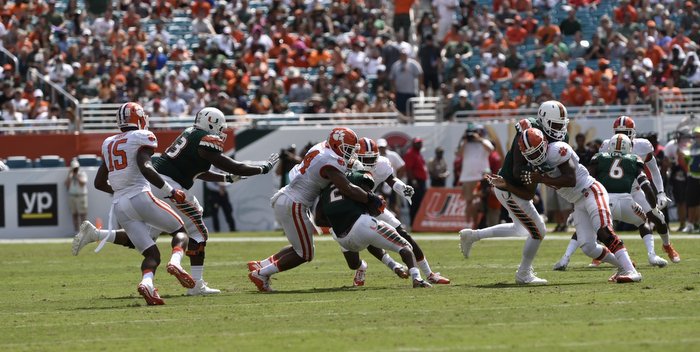 Kelly Bryant scored on a long touchdown run against the Hurricanes (Photo by Steve Mitchell, USAT)

The holidays are fast approaching, which means it’s time for the traditional naughty or nice list. Apparently, Clemson is on the naughty list of University of Miami defensive end Chad Thomas.

In all fairness, it’s not a naughty list. In true Miami fashion, it’s a hit list the Tigers find themselves on.

Rewind back to October of 2015. In what would wind up being the last game for Miami head coach Al Golden, No. 6 Clemson waltzed onto the Hurricanes’ home field and laid down a 58-0 thrashing.

The play that best describes how bad it was for Miami that day? Down 35-0 late in the second quarter backup quarterback threw a pick-six, and Clemson led 42-0 at intermission.

Clemson called off the dogs early, and backups played most of the second half. The Tigers played three quarterbacks – Kelly Bryant had a long touchdown run – and nine different Clemson players carried the ball. 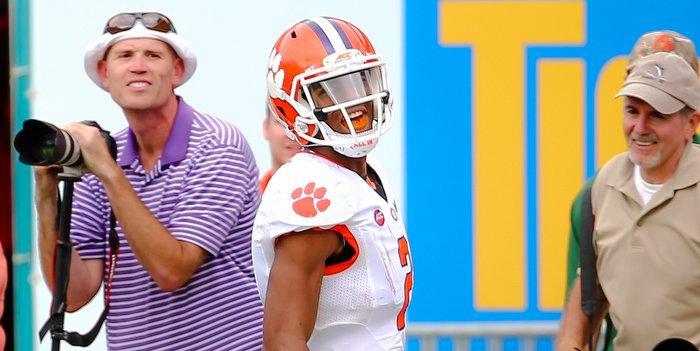 Kelly Bryant scored on a long touchdown run against the Hurricanes (Photo by Steve Mitchell, USAT)"

The Hurricanes fired Golden after the game, leading to the hire of current head coach Mark Richt. The Hurricanes finished the 2015 season with a 9-4 record and finished Richt’s first season at the helm with an identical 9-4 record.

"I've been telling them (my teammates) to add them on the 'hit list,'" senior defensive end Chad Thomas said. "We had a little 'hit list' for the teams that beat us last year. But they still on there, so just add them to it. We just got to play football."

Rosier was a backup on that October day two years ago, but will start Saturday night’s ACC Championship against Clemson and Bryant. Rosier told the media earlier this week that he thinks the Canes have come full circle since that loss two years ago and that he learned a lot of lessons during the loss.

“To a certain extent, yeah, with that game happening, Coach Richt got hired. It's put us to where we are now,” Rosier said. “The big thing I learned from that game is always be prepared. Brad, it was his second year starting. In those types of games, I'm not going to play being the backup. I think mid second quarter, Brad is down and I'm in. That was the biggest thing, to always be ready.

“I learned that Clemson is a very fast and physical team that year, just like they are this year. So the big thing is, just taking what they give me and try to make the least amount of mistakes, because that's what they live on. They live on QBs making mistakes. They have really good defensive backs, a great D-line. Coach had to put pressure on my face, make me throw hard. The big thing is just completing balls and methodically driving down the field.”

Junior safety Jaquan Johnson was a freshman during the game two years ago, and he says that loss led to big changes in the Miami program.

“I just remember that we lost that game. I got to play a little bit. I was able to force a fumble,” Johnson said. “But for the most part that was just a blowout basically. Clemson defeated us that day. The transformation is quite simple. It's night and day. You could tell by the coaching staff that we have. I had a different coaching staff my freshman year to now my junior year. I believe our standard, we holding ourselves to a higher standard. We're playing the Miami way, so, that's the biggest transformation I see.”